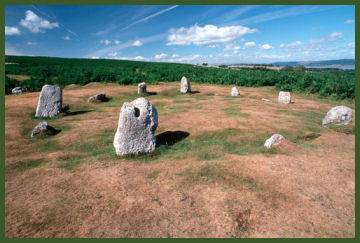 The Druid's Circle, also known as Birkrigg Stone Circle or Sunbrick Stone Circle, is situated on the east side of Birkrigg Common above the village of Bardsea and overlooks the vast tidal waste of Morecambe Bay.

The monument consists of two concentric circles. The outer ring measuring around 26 metres diameter, once had 15 stones which are now fallen and scattered, while the inner ring of 9 metres diameter still has 10 upright stones although none reach a metre in height, containing 31 stones. The circle dates to around 1700-1400 B.C..

The Druid's Circle has displayed evidence of having been used for burials. Cremated human remains were excavated from within the smaller circle in 1921

There are several other sites of prehistoric interest, dating from the Bronze Age, on Birkrigg Common.