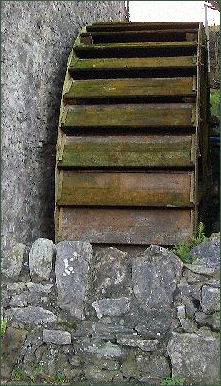 Located just north of the sprawling village of Gleaston near Ulverston, Gleaston Water Mill is set in a charming rural location. Now a tourist attraction, the mill would once have been used to grind wheat, barley and oats.

The present mill dates to 1774, its water wheel and milling machinery are still in good working order. The present building occupies the site of an earlier watermill which is believed to have dated from the early part of the fourteenth century.

The present structure is a typical imposing Georgian building which consists of three storeys, the walls and lintels of which contain much red sandstone, which was probably taken from the ruins of nearby Furness Abbey. The Mill is privately owned by Mike and Vicky Brereton and was restored in the early 1990's. The impressive wooden milling machinery is operating most days.

Follow the brown and white signs for Gleaston Watermill from the A5087, Ulverston to Barrow-in-Furness coast road and from Gleaston village.