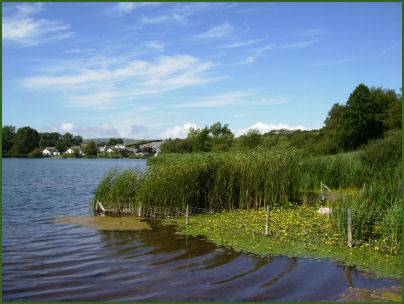 The villages of Great and Little Urswick on the Furness Peninsula stand on opposite sides of Urswick Tarn. The tarn is home to a variety of waterfowl including swans and bream. Traces of Neolithic farming in the area have been found at the southern end of the tarn. The tarn feeds Gleaston Beck to the south, the water is said to have a red hue due to the iron content of the surrounding land.

The village was recorded as 'Ursewica' in around 1150, deriving from the Anglo-Saxon language and meaning 'dairy farm by the lake of the wild cattle'. Great Urswick was granted to Michael le Fleming before 1111 by the Norman king, Henry I and was originally referred to as Much Urswick.

The red sandstone village church of St. Mary and St. Michael stands at Little Urswick. Tradition states that it was founded in the ninth or tenth centuries, a church certainly occupied the site in 1148. In 1909 a cross fragment was discovered at the church by a local vicar which was identified as Anglo-Saxon, with Viking influences, a further piece of the cross was discovered during restorations to the church in 1911. The runic writing upon it was translated by W.G. Collingwood to read

"This cross Tunwinni erected in memory of Torhtred a monument to his Lord. Pray for his soul."

The church's tower appears to be thirteeenth century with some fourteenth century windows. Inside the building, the altar has a painting of the Last Supper by James Cranke the Elder (1709-1781). Most of the stained glass in the church display the coats of arms of local families. The lancet window in the chancel contains fragments of ancient glass that are believed to have originated from Furness Abbey. 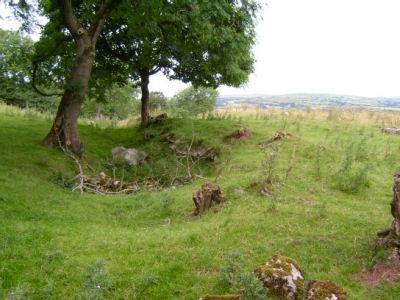 Great Urswick holds an annual Rushbearing ceremony, an ancient tradition, on the Sunday nearest St Michael's day (Sep 29th). The General Burgoyne Inn at Great Urswick dates to the early sixteenth century and is believed to have acquired its present name when a soldier who fought in the U.S. War of Independence with the General came home from battle and decided to name the inn in his honour. The pub serves very good meals.

Urswick Grammar School, at Little Urswick was founded in 1584 under a charter granted by Elizabeth I.

Urswick has visible remains of several Iron Age settlements, including the Skelmore Head hill fort on the hills which surround the village.To the south-east of Great Urswick stand the remains of a Iron-Age or Romano-British settlement (SD275734). The settlement is surrounded by a large bank of rubble, while inside can be discerned the foundations of two circular huts. There are the remains of a fort to the north of Great Urswick and a settlement north west of Little Urswick known as Urswick Stone Walls (pictured right). There are also several burial chambers in the area.

It is suspected that the Romans mined haematite in the Urswick area and some Roman items have been uncovered, although no evidence exists to suggest major settlement or military occupation.

The nearby Druid's Circle, also known as Birkrigg Stone Circle or Sunbrick Stone Circle, is situated on the east side of Birkrigg Common above the village of Bardsea and overlooks the vast tidal waste of Morecambe Bay.


A walk from Great Urswick

*Commencing at the Derby Arms Inn at Great Urswick turn right along the street, turn at the lane on the left near the end of the street and follow this lane up the fellside. On reaching the top of the track from where there are superb views of the Southern Lake District and across to Morecambe Bay, take the gate on the left and join the line of the wall which runs below, keeping the wall to your right. Pass through a gate and continue through a field. Pass over two stiles and cross two further fields.

*After a few hundred yards turn right along a further track angle off at a path through bracken to reach the Druid's Circle, also known as Birkrigg Stone Circle or Sunbrick Stone Circle, which consists of two concentric circles and has displayed evidence of having been used for burials.

*Proceed in a southwesterly direction across the common towards the small hamlet of Sunbrick, joining a road. at a point where the road bends sharply to the right go straight ahead along a lane. Pass through a farmyard and left after the barn to pass through large metal gate and continue along the track. Cross a road and a gap stile and continue across a field, pass by a kissing gate, walking with the wall on your left. Pass through a kissing gate and cross a further field.

*Turn right and continue up the street turning left along a public footpath for 'Dimple Holes Lane'. Pass through a gate and folow the track through a field to a waymark post, follow this to the far corner of a wakll and continue to the ladder stile at the far end of the field. Continue to follow the track down a further field and cross two stiles to arrive at a road. Cross the road and enter the opposite field. Cross a stile and proceed along the line of the wall and pass through the gate at the top. Turn right and follow the hedge along the bottom of the field. Cross a ladder stile then a gap stile to a field. Cross the fild to join a lane which leads into Great Urswick's main street.