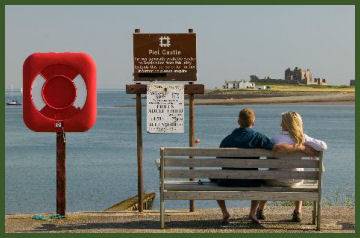 Piel Island is a twenty acre island situated near to Walney Island, Barrow-in-Furness, lying half a mile (1km) from the southern tip of the Furness Peninsula.

In the Medieval period, Piel was known as Fowdray Island. This name has its origins in the Old Norse words of "fouder" meaning fodder, and "ay or oy" meaning island.

The island now designated a Site of Special Scientific Interest, was given to the people of Barrow in Furness by the Duke of Buccleuch in 1920 as a war memorial.

It is managed by the 'King of Piel' a title given to the Landlord of the Ship Inn pub, who is also the only permanent resident on the island. The Ship Inn itself dates to the eighteenth century and is frequented by tourists, yachting and boating people, local fishermen and day-trippers.

The pub practices a quaint old tradition, which dictates that anyone who sits on the old oaken chair inside becomes a Knight of Piel. The Knights duties are to buy everyone a drink, only smoke in moderation, be an ardent lover and be of good character. In return he gains the right to free board and lodging in the event of being shipwrecked.

The wildfowl Reserve on the island is home to a wealth of wildlife, including Moorhens, Coots, Eider duck, Cormorants, Herring Gull and Blackheaded Gulls, and when the tide is out waders and shore birds such as Curlew, Green Shank, Red Shank, Plover, Shell Duck and Lapwing can be seen.


Piel Castle has an interesting history, it was originally a dwelling-house, it was given, by King Stephen, to the Savignac monks (later the Cistercians) of nearby Furness Abbey in 1127 and was fortified by the Abbot of Furness. The present stone castle was founded in the early 14th century by Abbot John Cockerham. 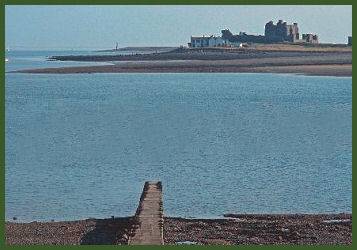 Guarding the entrance to Barrow in Furness Harbour, Piel Castle stands at the south eastern point of Piel Island. Its ts massive keep is encased by inner and outer walled and ditched baileys. The castle was dismantled in 1403, but partly rebuilt in 1429, by 1537 it had begun to fall into decay The southern and eastern parts of the keep, the curtain walls and flanking towers, are being eroded by the sea.

The Yorkist pretender, Lambert Simnel landed on the Island on 4th June, 1487 with an army of over 2,000, at the start of his ill fated attempt to seize the crown, from the Tudor King Henry VII. Following the Dissolution of the Monasteries in 1537 both Piel Island and its castle were siezed by the crown. The castle is now in the care of English Heritage and there is free unlimited access.


Access to the island is by ferry, which runs every weekend from Roa Island throughout the summer, starting at Easter time and ending in early autumn. Ferry crossings usually start around 11am, the last return from Piel is around 5.30pm

Images courtesy of the Cumbria Tourist Board