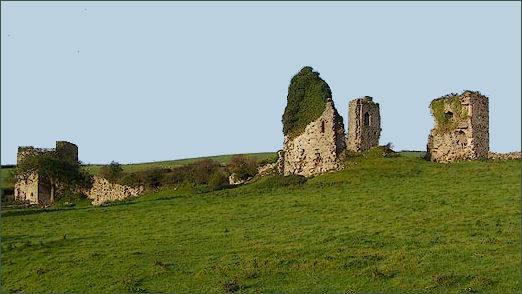 Gleaston Castle is situated in a valley to the north-east of the village of Gleaston, which lies between the towns of Ulverston and Barrow-in-Furness in Cumbria's Furness peninsula.

The castle consists of the remains of four towers connected by curtain walls around a roughly rectangular courtyard. It is first mentioned specifically in 1389, although Sir John de Harrington, 2nd Baron Harington of Aldingham is said to have died at Gleaston in 1369. It is assumed that the castle was begun by his grandfather Sir John, 1st Baron Harington in around 1326.

It is however, possible that part of the structure is of an earlier date and was constructed as a defence against the Scots who posed a serious threat to the area following Edward I's campaigns and Robert Bruce's assumption of the Scottish throne. The majority of the castle must surely have been built after the devastating 1316 and 1322 Scottish raids on the area as it was built quickly and poorly, with poor quality local materials, suggestive of a lack of funds. 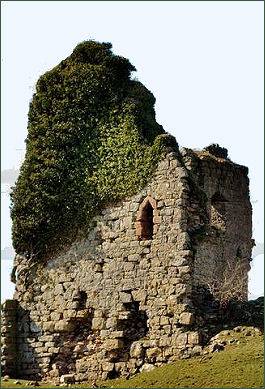 The castle was the main family seat of the Lords of Aldingham until the death of William de Harrington, 5th Baron of Aldingham in 1457. The estate then passed to William's daughter Elizabeth who had married William Bonville, 1st Baron Bonville of Shute in Devon and the title of 6th Baron Harington was inherited by their son William. The Bonvilles made Devon their main seat of residence and Gleaston Castle was abandoned and quickly fell into disrepair.

William Bonville Jnr died along with his father during the Wars of the Roses at the Battle of Wakefield in 1460. The aged Lord Bonville was executed after the Lancashire victory at St Albans in 1461. So the castle fell to William's newborn daughter Cecily, who later married Thomas Grey, 1st Marquess of Dorset. Eventually it fell to Henry Grey, 1st Duke of Suffolk who sold the castle and its adjacent demesne land to his bailiff Walter Curwen before he was beheaded for treason in 1554, by which time it was in ruins.

In 1540 Leyland noted: "there is a ruine and waulles of a castell in Lancaster-shire cawlyd Gleston Castell sometyme longinge to Lord Harrington now to the Marquis of Dorset." One of the southern towers may have been inhabited in the 16th century but by 1727 a farmhouse had been built adjacent to the southeastern tower. It appears Curwen sold the site to Thomas Preston, a local landowner, whose descendant Lord George Cavendish was probably responsible for creating much of the farm that can be seen today. Gleaston Castle Farm became an important asset to the Cavendish estate after the Industrial Revolution made wheat and barley production highly lucrative.

The farm was sold in 1920 to Thomas Barton Jackson of Bolton Manor, Urswick and again in 1927. Today the castle is a scheduled monument and a Grade I listed building. The ruins can be viewed from the roadside, but it is unsafe to enter the castle due to its state of repair. As of 2010, English Heritage considered the property to be in a very poor condition and at risk of further deterioration; plans for remedial action were being discussed with the owners.