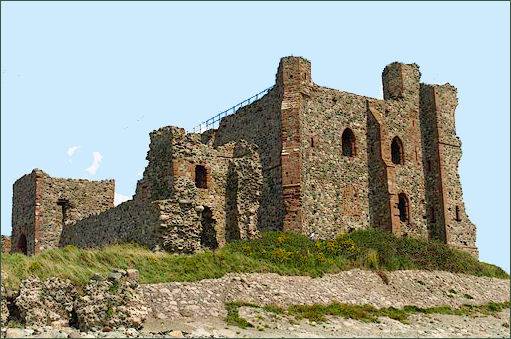 Guarding the entrance to Barrow in Furness Harbour, Piel Castle stands at the south eastern point of Piel Island.

The castle's function was to protect Piel harbour, a sheltered area where mercantile shipping could transport goods to and from their estates on Isle of Man and Ireland. Its massive keep is encased by inner and outer walled and ditched baileys. The castle was dismantled in 1403, but partly rebuilt in 1429, by 1537 it had begun to fall into decay The southern and eastern parts of the keep, the curtain walls and flanking towers, are being eroded by the sea.

The castle has an interesting history, it was originally a dwelling-house, it was given, by King Stephen, to the Savignac monks (later the Cistercians) of nearby Furness Abbey in 1127 and was fortified by the John Cockerham, Abbot of Furness when in 1327, King Edward III gave the abbey a licence to crenellate on the site.

Consisting of a keep with an inner and outer bailey, the castle was intended to oversee the trade through the harbour, and to provide defence, as the Abbey had faced raids from Scotland in 1316 and 1322. 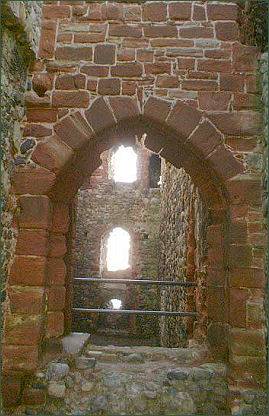 The pretender, Lambert Simnel, who claimed to be the Yorkist heir, Edward, Earl of Warwick, but in reality was the son of an Oxford craftsman, landed on Piel Island from Ireland on 4th June, 1487 with an army of over 2,000, at the start of his ill fated attempt to seize the crown, from the Tudor King Henry VII. Simnel attempted to obtain aid help from potential local supporters and held court at the castle. He did not remain long, having spent just twelve days on Piel Island, he and his force of about 8,000 men - English dissidents, poorly equipped Irish and about 2,000 German mercenaries marched inland to be defeated by the forces of Henry VII at the Battle of Stoke Field. The last battle of the Wars of the Roses. Simnel was captured and pardoned by Henry VII who assigned him to the royal kitchen as a spit-turner.

By 1534 the castle had fallen in ruin and was described in a report as "sore decayed". Following the Dissolution of the Monasteries in 1537 both Piel Island and its castle were siezed by the crown.

During the Civil War Piel Castle was still in decline. The Royalist forces considered the option of occupying the Castle and rebuilding the fortifications, but the idea was rejected. After 1660, the castle was given to the Duke of Albermarle. In 1811, the poet William Wordsworth visited the area and wrote a poem entitled "Peele Castle" describing the site. The island was later purchased by Walter Scott, the Duke of Buccleuch, who carried out an extensive restoration of the castle between 1877 and 1878, destroying most traces of the medieval occupation of the site in the process. His descendant, John Scott, decided to sell the island and castle in 1919, the local mayor, Alfred Barrow, intervened and the following the year the Duke instead agreed to give the castle and island to the local authorities as a memorial to those who had lost their life in World War I. The castle passed into the care of central government in 1973.

Piel Castle is now in the care of English Heritage and there is free unlimited access.

Access to the island is by ferry, which runs every weekend from Roa Island throughout the summer, starting at Easter time and ending in early autumn. Ferry crossings usually start around 11am, the last return from Piel is around 5.30pm