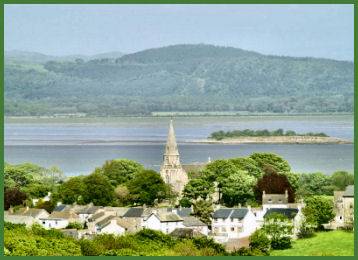 The seaside village of Bardsea lies on the Furness Peninsula, standing on the west side of Morecambe Bay and to the south west of the town of Ulverston. Bardsea was part of the county of Lancashire until the county boundary changes of 1974.

Once a remote fishing village, Barnsea has a long history and is mentioned in the Domesday Book of 1086, where it is referred to as 'Berretseige'. The name may possibly derive from the old Celtic words Berthsig which means place of the thickets.

Construction began on Holy Trinity church in the village in 1843, the building was completed in 1853. The Ship Inn, one of two pubs in Bardsea, dates from 1750 and once served as a farmhouse.

Bardsea existed as small fishing community into the mid nineteenth century and was reached mainly by crossing the treacherous sands of Morecambe Bay. It rose to importance when the mining and production of iron ore led to industrialization in the Furness Peninsula, when steamers left Baarsea bound for the Lancashire towns of Fleetwood and Liverpool.

Nearby Conishead Priory, described by English Heritage as '...a very important Gothic revival country house with few peers in the north west; the distinctive two towers of the front elevation are an important local landmark.' A building has occupied the site since Elizabethan times, which was replaced in the nineteenth century by the present house.  Thomas Bradyll, a colonel in the Coldstream Guards and the son of one of George III's grooms of the bedchamber, owned the estate at that time. The building now serves as the Manjushri Kadampa Meditation Centre is an international Buddhist College. 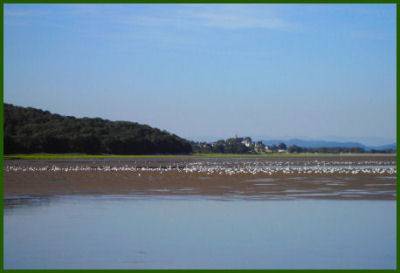 The area has strong Quaker connections, George Fox (1624-1691) , the founder of Quakerism, lived at nearby Swarthmoor Hall. His wife Margaret Fell, who inherited the hall from her first husband and was known as "the mother of Quakerism" is buried at the Quaker Burial Ground on Birkrigg Common.

Swarthmoor Hall itself dates back to around 1586 and was built by by a wealthy local landowner and lawyer, George Fell of Hawkswell. The hall remains in use today as a Quaker retreat house, and hosts a fine collection of seventeenth century furniture. It also houses some of George Fox's personal effects and other items of historical interest to Quakers.

Seawood, an ancient woodland with oak trees close to the sea, and a site of special scientific interest, is located next to the park and owned by the Woodland Trust. Ample parking is provided, with refreshment facilities and access to the beach. The area is also popular amongst bird watchers and sea anglers.

The Druid's Circle or Birkrigg Stone Circle as it is often referred to stands above the village on the east side of Birkrigg Common. The monument dates to the Bronze Age and consists of two concentric circles.