The ruggedly beautiful Great and Little Langdale Valleys, in the shadow of the distinctive Langdale Pikes, converge at Elterwater. Great Langdale is a high side glacial valley of impressive crags interlaced with the white threads of mountain streams. 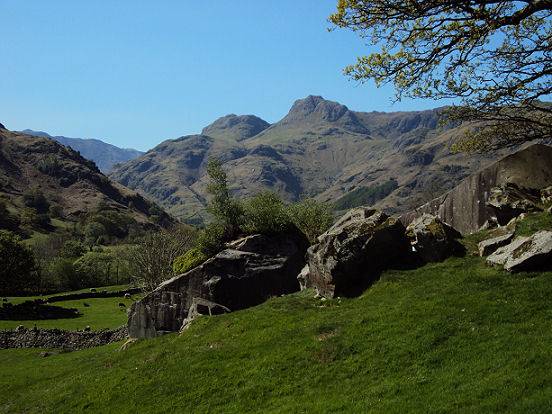 Great Langdale is perhaps the most dramatic of the Lake District valleys and is sparsely populated. It is a highly popular place for camping, rock climbing and walking. The only village in the valley is Chapel Stile.

The area holds the distinction of being one of the oldest occupied areas of the Lake District. Neolithic peoples favoured the hard volcanic rock of the area to make their stone axe heads, evidence of their habitation can be found at the many axe head quarries in the area. The Langdale Boulders at Copt How near Chapel Stile date from 2,500- 5,000 years ago.

The head of the Great Langdale Valley from Side Pike 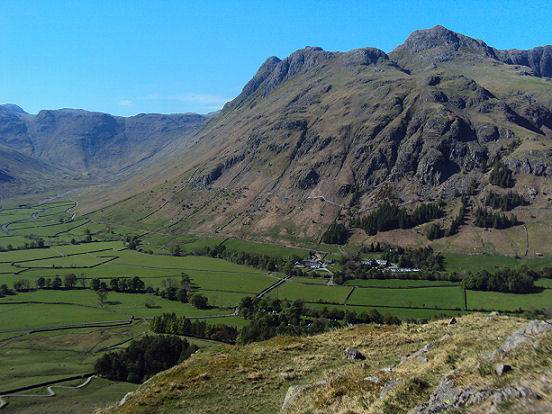 The walk up by Stickle Ghyll to Stickle Tarn is an hour's climb from the car park up Stickle Ghyll itself, where a wide stone stepped path is provided. The dramatic sixty feet waterfall of Dungeon Ghyll can also be reached on foot and is well worth the effort.

The valley was famous as the haunt of smugglers in the 1800's, when alcohol was illicitly brought in from the Isle of Man, where taxation was non-existent. 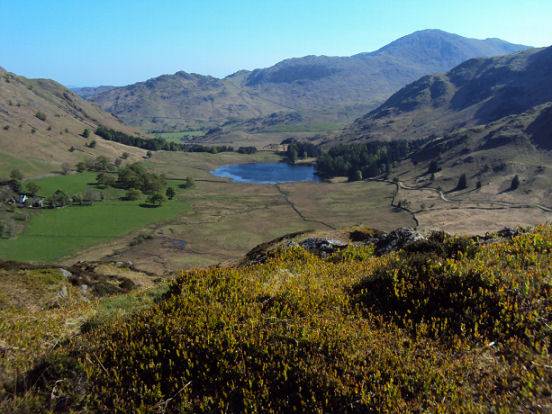 Blea Tarn, is a superbly panoramic spot situated near the Great Langdale Valley.