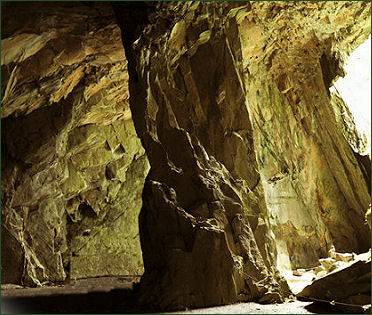 Dramatic Cathedral Cave lies in the Cathedral Quarries, former Lakeland green slate quarries, which are situated in Atkinson Coppice above the Little Langdale Valley. The quarry site is managed by the National Trust and is open to the public. 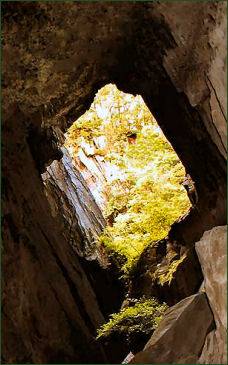 The quarries feature various chambers and tunnels, including one which is 400 feet (120 metres) long.

The quarry's main attraction, Cathedral Cave, measures 40 feet (12 metres) in height, the chamber has a huge rock pillar which supports its roof and two window like openings. By the central pillar is a large clear pond.

The larger of the two openings opens onto the second level of a pit quarry. The smaller opens out into a narrow, cutting like quarry, which eventually leads back to the oiginal entrance. There are various tunnels tfor the visitor to explore, some of which will require lighting, as one is about 400 feet long. Some of the quarry's smaller chambers are closed off for safety or have already collapsed.

The quarry features at least 25 named rock climbing routes that are graded Extreme and are 30-40 m long. The spoil heaps from these mines form large banks where silver birch and larch now grow.

Make sure to read the signs at the entrance to the quarry, which will provide more information on the site and advice on safety when entering the site. The ground inside the quarry is rock strewn and often wet underfoot. If you're planning a visit to the quarry make sure that you take a torch along to get the most out of your visit to the site.

From the Britannia Inn in Elterwater Village, with the pub on your right and the National Trust car park on your left follow lane ahead, pass over the stream and the youth hostel. Follow the track on the right a track uphill toward Little Langdale and bear right across the field. The path will lead you down besides the Three Shires Inn in Little Langdale. Turn right and take the lane on the left towards Slater's Bridge. Take the path to the left towards woodland to reach Cathedral Quarry.