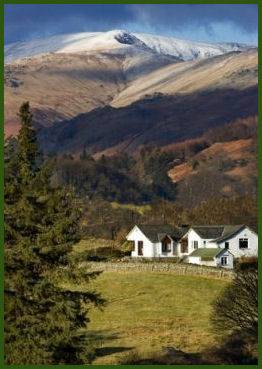 High Raise, at 762 metres (2,500 ft) is the highest point in the central Lakeland fells and is the central mountain in the district.

The barren summit palteau is strewn with grey boulders, leading to the alternative name of High White Stones with which it is often referred to. There is an Ordnance Survey column at the summit and a large cairn which is also used as a wind shelter.

The views from the summit are breathtaking and magnificent, sections of Bassenthwaite Lake and Derwentwater in the North Lakes can be seen as well as all the major fells.

To the east there are a number of subsidiary ridges which diverge from Sergeant Man. Although part of High Raise, Sergeant Man is considered by many as a separate fell. It is a popular target for walkers ascending the Pikes from Grasmere via Easedale

The main ascents of High Raise are from Stonethwaite in Borrowdale or the New Dungeon Ghyll Hotel in Great Langdale, although there are alternative routes from Grasmere and Thirlmere . The Stonethwaite route provides the walker with the opportunity to climb the neighbouring fell of Ullscarf, while the Great Langdale route allows visits to the panoramic Langdale Pikes.


The Ascent from Stonethwaite in Borrowdale

*Commencing at the telephone box at Stonethwaite in Borrowdale turn left down the track to cross Stonethwaite Beck. Turn right and continue along the path by Greenup Gill until reaching Lining Crag.

*Continue along the steep path to the left of the crag, which climbs to the summit of Lining Crag. Turn left at the top, and proceed on the path to the col of Greenup Edge, turn ight at Greenup Edge and follow the path up to High White Stones. The summit is marked with a triangulation point.

Mountans of the Lake District