Curiously named Whorneyside Force at the head of Great Langdale stands in a secluded and dramatic setting in the shadow of Crinkle Crags. 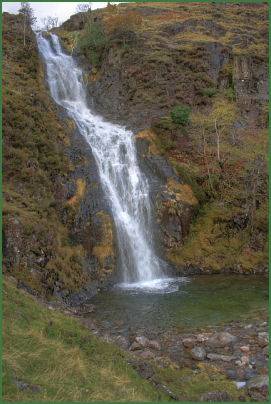 The waterfall is situated on Whorneyside Fell, high on the mountainside. Hell Gill Beck drops a total of more than twelve metres into a deep bowl shaped pool. There are excellent views down Great Langdale from the waterfall. Whorneyside Force can be reached by a moderate walk from Great Langdale.


A Walk to Whorneyside Force

*Commencing at the National Trust car park just past the New Dungeon Ghyll Hotel, take the footpath leading from the car park, ascending the fell to join the Cumbria Way Footpath. Cross a wooden footbridge, bear left and then right.

*Cross a footbridge and turn right continuing to follow the edge of the beck until reaching the waterfall.

* Retrace your steps to return to the car park in Great Langdale.