Patterdale and Glenridding are the main centres from which to explore the Ullswater area. Patterdale, which name derives from Patrick's Dale, stands about a mile south of Glenridding at the foot of Grisedale on the southern shores of Ullswater. St. Patrick, it is related, visited the dale after being shipwrecked at Duddon Sands. He is said to have converted many of the local people to Christianity. 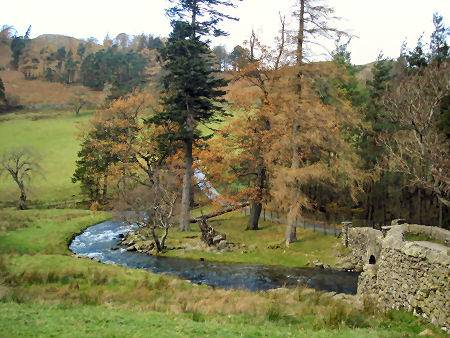 The village has two pubs, the White Lion, which offers accommodation, and the Patterdale Hotel, which has a public bar as well as guest houses and camp sites. It also has a village store and post office.The main industries today are sheep farming and tourism. Mining was the areas main industry until the closure of the Greenside Lead Mine in 1960. Situated in one of the most scenic areas of Lakeland, Patterdale and nearby Glenridding are popular with walkers, offering walks to suit all levels of ability, including access to the Helvellyn range and Striding Edge via the beautiful larch clad banks of Grisedale Beck. Place Fell, Sheffield Pike and St Sunday Crag are all within easy reach.

The Helvellyn Massif from Patterdale 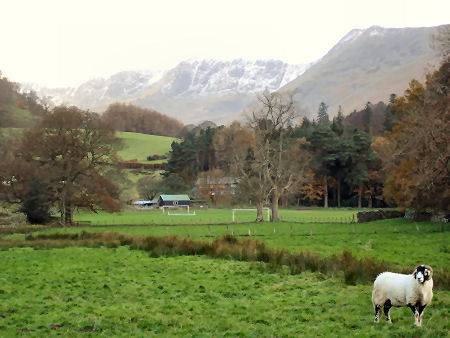 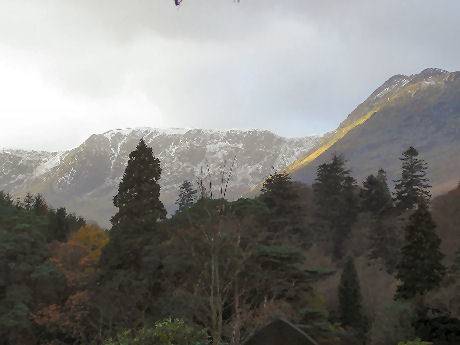 
Peaceful St. Patrick's Church in the village is said to be one of the finest Victorian churches in the Diocese of Carlisle. The church was built in 1853, replacing an older, Tudor chapel which stood on the site. The church was designed by the famous Victorian architect Anthony Savin and built by Levi Hodgson and Robert McAdam of Patterdale. The meeting room was added in 1995.

The church is situated by the footpath that leads to Helvellyn and contains wall hangings by Ann Macbeth, (1875- 1948) a famed embroideress who resided at High Bield in Patterdale from 1921 - 1948. 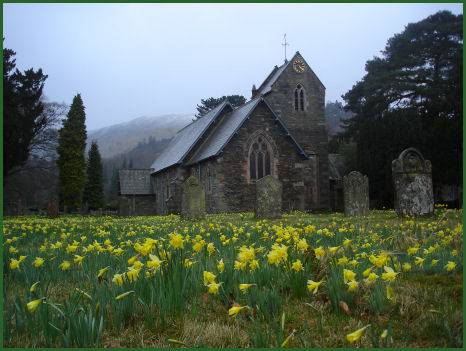 The font is the only pre- Victorian item in the building, the basin, which was restored in 1900 is mounted upon a pedestal which may be part of a medieval standing cross. The altar at the west end of the church originally came from the London church of St. Martin in the Fields, it is dedicated to all those who have lost their lives in air crashes on the Lakeland Fells. Many of the attractively embroidered and colourful kneelers were made by local people. 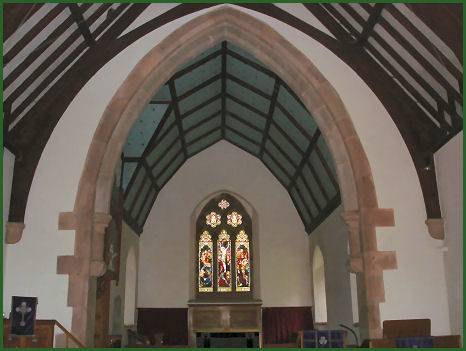 In the the churchyard once stood two ancient yew trees, which in 1883 were destroyed by high winds. St Patrick's holy well where the saint is reputed to have performed baptisms, is located near the church and war memorial, it was popularly believed to heal the sick.