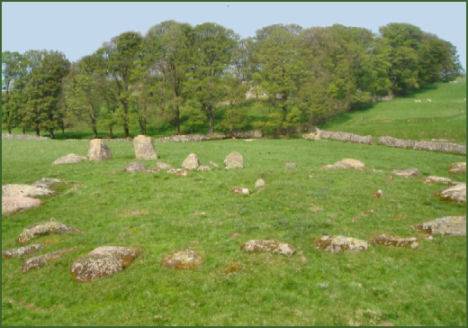 Gunnerkeld Stone Circle, which is situated scarcely a few metres from the M6 motorway and 2 km north of the village of Shap, is a concentric stone circle,(two rings of stones with a common centre) which are fairly rare, only around thirty exist in Britain. Although much ruined, Gunnerkeld is still impressive.

The outer circle is around 35 metres in diameter, the smaller, inner, raised circle is in better condition, it measures 16 metres in diameter and encloses a burial cist. There are two large stones to the north which may be entrance portals and a further large stone which stands SSW of the monument. The Stone Circle is thought to date to the Late Neolithic to Early Bronze Age periods.

Gunnerkeld is part of a cluster of concentric circles in the Lake District with further examples at Oddendale, The Druid's Temple and Shapbeck. The name derives from the Old Norse meaning the 'Spring of Gunnarr'. The site occupies private land and permission from the landowner must be sought.