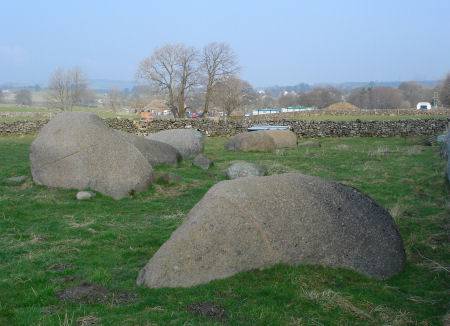 Kemp Howe Stone Circle stands in a field off the road just south of the North Lakeland village of Shap.

The circle is now disected by the West Coast Main Line Railway and is overshadowed by the Corus Shapfell lime works.

Kemp Howe consists of six pink granite boulders which stand adjacent to the railway embankment. The circle once possessed an avenue of stones leading from it to a barrow which lies North North West.

Some of these avenue stones still survive to the present day, including the Googleby Stone although the avenue itself was destroyed at the time of the enclosure of the common land. Burn writing in 1777, in his 'History of Westmorland' makes reference to to a area of half a mile encompassed with large stones and a circle of large stones.
which was previously known as "Kar Lofts". The avenue is said to have run for about half a mile from Kemp Howe Stone Circle to Skellaw Hill (known as the the hill of skulls).

The surviving part of the avenue lie to the west of Shap. Many other stone circles lie in the nearby area which is rich in prehistoric remains.