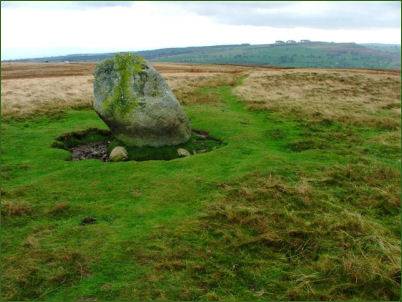 The largest of the stone circles is known as Cockpit and stands on the north west side of Moor Divock, before the land descends down to Ullswater. The circle, which dates to the Bronze Age, measures about 34 metres in diameter and consists of a low stone embankment, set into which are 75 stones, the tallest of these is a little less than a metre in height. A gap in the stones at the western side may once have formed an entrance.

The Cop Stone, ( pictured left) a glacial erratic stone, (at NY 496217) stands at a height of around 1.5 metres (5 feet).The leaning stone or menhir forms part of a man made bank of around 20 metres in diameter.

A further two circles are known as Moor Divock 4 and 5. Moor Divock 4 has a diameter of around 10 metres, and consists of 10 stones, stone 8 of this circle bears mysterious cup and ring markings. Excavatiions in the nineteenth century unearthed a cremation and urn.The remains of an avenue branch out to the north west.

Only a few stones remain standing at Moor Divock 5, the rest are scattered.

Moor Divock may be reached by taking the footpath which leads from the village of Askham.