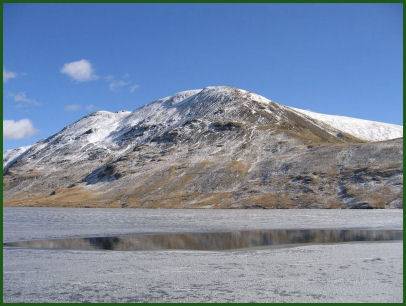 Serene and scenic, Grisedale Tarn lies between the towering fells of Fairfield (873 metres, 2,863 feet) and the southern foot of Dollywagon Pike (858 metres, 2,815 feet). The tarn lies at an altitude of around 1,770 feet and has a reported depth of around 110 feet.

According to Cumbrian legend, the ancient crown of the kingdom of Cumbria was carried and deposited there following a bloody Dark Age battle between the Celts and the Anglo-Saxons for control of Cumbria, which was fought in 945. The battle resulted in the defeat and death of Dunmail, the last king of an independent Cumbria and the Saxon King Edmund the Elder, who was the grandson of Alfred the Great. A large heap of stones on Dunmail Raise, near Grasmere, is purported to mark Dunmail's final resting place.

Grisedale Tarn lies at the confluence of three valleys, one of which Grisedale, from which the tarn derives its name. The word tarn derives from the old Norse word 'tjorn' meaning teardrop. The tarn flows out to Ullswater, which lies three miles to the north east along the Grisedale Valley.