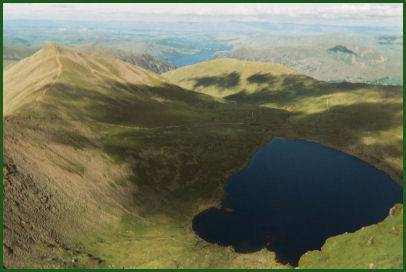 Bleak Red Tarn lies on the eastern flanks of Helvellyn and is enclosed by forbiding Striding Edge and Swirral Edge.

Red Tarn was formed when the glacier that carved out the eastern side of Helvellyn had melted. It is fed by a number of streams running down its rear wall down into the corrie and it flows outward into Glenridding Beck

In the nineteenth century Red Tarn was dammed, using boulders, which raised the water level some eight or nine feet in order to supply power to the Greenside Lead Mine at Glenridding.

The tarn is popular as a rough camping site with mountaineers and contains a very rare fish called the schelley.


The route to Red Tarn from Glenridding

*Commencing at the car park at Glenridding, go south crossing Glenridding Bridge. Turn right in front of the shops before heading west south west along the lane for around 300 metres until reaching a fork in the path.

Take the left fork and proceed along the path climbing the hillside to Lanty's Tarn. Continue south passing the tarn, the path then descends and joins another path. Take this path which climbs steeply up the north side of Grisedale to a broad col at the start of Striding Edge.

*Pass through the Hole-in-the-Wall then descending to Red Tarn. From the outlet of Red Tarn take the path as it descends to a footbridge. Cross this and proceed along the path to a further footbridge. After crossing this, follow the track (then road) to Glenridding.