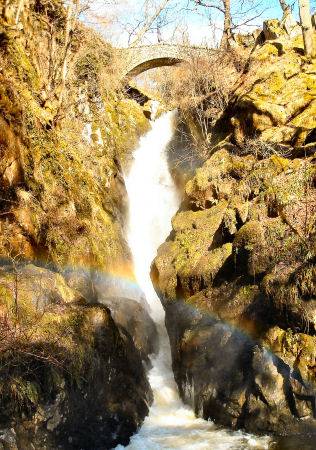 Aira Force, perhaps the most famous and one of the most frequently visited waterfalls in the Lake District, is situated in woodland near the northern shore of Ullswater, about 3 miles along the A592 from Patterdale and about 150 yards from the junction with the A5091.

Aira Beck plunges dramatically around 65 feet through an overhead bridge and over the rocks. The beck has its source high on the slopes of Stybarrow Dodd.

The term "force" is used in many parts of the Lake District as a synonym for "waterfall"; it has its origins in the Old Norse word fors . The force is a spectacular, roaring waterfall which falls over seventy feet of rock, sending dropets of spray high into the air. There are bridges above and below the force which afford superb views, the upper is an old pack horse bridge.

Aira Force can be accessed from a car Park near to Ullswater, via a charming half mile route taking the visitor through a pleasant Victorian arboretum which is managed by the National Trust. The car park provides a cafe, information and toilets. The path continues from the higher packhorse bridge, following the course of Aira Beck to the smaller waterfall of High Force.

In the 1780's the Howard family of nearby Greystoke Castle owned a hunting lodge near to Aira Force and landscaped the area below the waterfall, planting over two hundred specimens of cedars, firs, pines and spruces. Red squirrels inhabit the woodland.

The fall is mentioned in at least three of William Wordsworth's poems, who visited the area frequently. The force has attracted an interesting medieval legend, which Wordsworth relates in his poem, The Somnambulist. The hunting lodge at the site was reportedly the home to a girl named Emma who was engaged to a knight, Sir Eglamore. Sir Eglamore's long absences affected Emma badly and she consequently began to sleepwalk, apparently wandering along the path near the waterfall while so affected. Her returning fiance sighted and grabbed her, startling her into wakefulness, at which she fell into the water below and perished. The broken hearted Sir Eglamore lived out the remainder of his life as a recluse in a cave near the force.