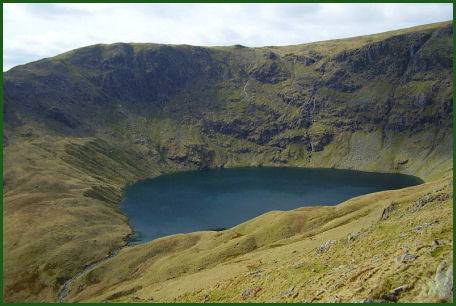 Remote Blea Water is one of two corrie tarns that lie beneath the eastern crags of High Street, the other being Small Water Tarn.

The tarn occupies a dramatic setting, edged on three of its sides by a ampitheatre of towering cliffs and slopes of Riggindale Crag, Pilot Crag and High Street.

The Riggindale valley is the only place left in England where Golden Eagles nest. An RSPB (Royal Society for the Protection of Birds) observation post is located in the remote valley. A pair of eagles first nested in the valley in 1969. Since the first nesting three males have held tenure of this wild corner of the Cumbrian mountains producing sixteen young, though the female has changed several times over the period.

The depth of Blea Water has been artificialy increased by means of a small dam at the outfall to provide water for the local area. In its route to the valley of Mardale, the stream from the tarn, Blea Water Beck, combines with that of Small Water Tarn, from where they flow on together into Haweswater.

Once known as Bley Water, the tarn's name derives from the Old Norse language and means dark blue.

The route to Blea Water

*Commencing at the public car park at Mardale at the eastern end of Haweswater, pass through the gate at the end of the road. Turn right and follow the path to a wooden footbridge which crosses Mardale Beck. After crossing the beck, turn left.

*Proceed along the path, climbing above Blea Water Beck and stay on the path until arriving at Blea Water.