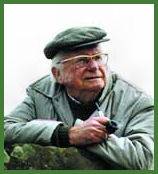 Alfred Wainwright, fellwalker, illustrator and author of the famous 'Pictorial Guides to the Lakeland Fells', was born in 1907 at the town of Blackburn in Lancashire, the son of a stonemason.

Due to his father's alcoholism, the young Alfred had a relatively poor upbringing, nevertheless he did extremely well at school. He left school at thirteen and began his career as an office boy in Blackburn Borough Engineer Department. He spent several further years studying at night school, gaining qualifications in accountancy.

At the age of 23, Wainwright took a week's holiday, fellwalking in the Lake District with a cousin, Eric Beardsall. It was the start of a love affair with the Lake District which was to last for the rest of his life. Wainwright's first Lakeland fell was Orrest Head with its stunning views of Lake Windermere and the Lakeland Fells. Orrest Head remains today just as Wainwright would have seen it. A plaque to his memory, recording the event, now stands at the summit.

He married for the first time in 1931 to a local mill worker, Ruth Holden, the marriage produced one child, named Peter. A job at the Borough Treasurer's Office at Kendal allowed Wainwright to move closer to the Lake District, after which he began to climb the fells in earnest. His love of fell-walking was obsessional, he set out by bus and regularly walked alone whatever the weather, to challenge the Lake District peaks before painstakingly committing his experiences to paper when he arrived home. He stayed in Kendal for the remainder of his life, serving in the post of Borough Treasurer from 1948 until his retirement in 1967. His first marriage to Ruth was later disolved just before he retired. A few years later he met his second wife Betty, who was also a divorcee.

Wainwright started his famous 'Pictorial Guide to the Lakeland Fells', a series of handwritten and hand drawn books, on 9 November 1952 . Meticulously planned out, he worked on the seven volumes which followed for the next thirteen years, completing one page per evening. The early editions were published by his friend Henry Marshall, Chief Librarian of Kendal and Westmorland, a local newspaper, the Westmorland Gazette later assumed the role. 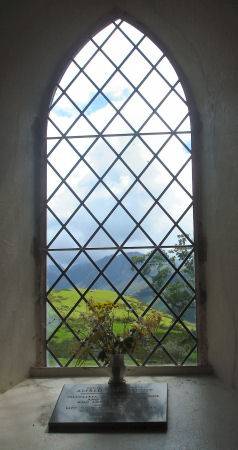 The pictorial guides were followed by the Pennine Way Companion in 1968 and in 1973 he devised the Coast to Coast Walk, a 190-mile long route which traverses northern England from St. Bees in West Cumbria to Robin Hood's Bay in Yorkshire. Wainwright's last major guidebook The Outlying Fells of Lakeland was published in 1974. A prolific writer, he also published an autobiography entitled Ex-Fellwanderer, in 1987.

In the mid 1980's and now an octeganarian, he embraced a new career as a television personality, in 'Wainwright's Walks' a series of programmes presented by Eric Robson, now chairman of the Wainwright Society. Robson later said of him "He communicated better than any guide book writer before or since the essence of the Lakeland landscape, the visceral attachment of man to place, the spiritual power of weathered rock and angry sky. He was priest and poet in his own blunt way."

Wainwright was also an avid supporter of animal rights, and generous in his patronage of them, he donated many of the profits from his books to animal charities. A modest and enigmatic man, he was known to be hugely protective of his privacy.

With his eyesight deteriorating rapidly and his health was gradually beginning to fail, Wainwright died of a heartattack at the age of 84 in 1991.

On March 22, 1991, his ashes were scattered by his second wife Betty, according to his wishes, on the shore of Innominate Tarn, a small and shallow sheet of water beneath the summit of Haystacks. At nearby St. James Church in Buttermere Village, a stone tablet was later placed beneath a south window of the church that looks onto Haystacks. The caption reads:-

"A quiet place, a lonely place. I shall go to it, for the last time, and be carried; someone who knew me in life will take me and empty me out of a little box and leave me there alone. "And if you, dear reader, should get a bit of grit in your boot as you are crossing Haystacks in the years to come, please treat it with respect. It might be me."

A Pictorial Guide to the Lakeland Fells

Autobiographical works
Fellwanderer: The Story Behind the Guidebooks (1966)
Ex-Fellwanderer (1987)
A Pennine Journey: The Story of a Long Walk in 1938 (1987)