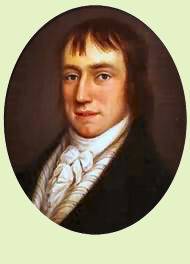 Inspired by the epic grandeur of the Lake District landscape, where he was born and lived most of his life, William Wordsworth (1770-1850), the Victorian Poet Laureate, is the foremost of English Romantic poets.

The great Lakeland poet was born at Wordsworth House in the Cumbrian town of Cockermouth on the western edge of the National Park on 7 April, 1770, the second son of John Wordsworth and Anne Cookson.

John Wordsworth came from middle class Yorkshire stock. William's childhood was spent at Cockermouth and Penrith, the family lived at Wordsworth House, in Cockermouth, an elegant Georgian mansion which became their home in 1766 when William's father was appointed to the position of steward to James Lowther. The young Wordsworth attended school at Cockermouth between 1776 and 1777. He lost his mother when he was but eight years old, and tragically, his father followed her to the grave but five years later.

William was separated from his much loved sister Dorothy and went to live with his two uncles. Dorothy was brought up by their maternal grandmother. A highly imaginative child, he was educated at Hawkshead Grammar School. During his period of residence in Hawkshead he lodged at Anne Tyson's cottage, which today proudly declares the fact on a plaque for the information of visitors to the village. In these early, formative years, the young Wordsworth developed a great love and appreciation of the Lakeland landscape, which he was to vividly retain for the rest of his life.

In 1790, Wordsworth embarked on a summer walking tour through revolutionary France. During this time he met Annette Vallon, who was to become his mistress and later bore him an illegitimate daughter, Anne Caroline. Largely influenced by the events of the French Revolution, he made an attempt to break away from the artificial diction and the neo-classical traditions of his age.

William first acquired critical attention at the age of twenty-eight with the publication of his 'Lyrical Ballads' with Samuel Taylor Coleridge in 1798. It included his 'Lines Composed Above Tintern Abbey' , written in a simplistic style which was widely criticized at the time. Undaunted, William continued to write his celebrations of nature, producing such masterpieces as his long autobiographal poem 'The Prelude', which was published in 1839.

William married his childhood schoolfriend, Mary Hutchinson, in 1802, the couple moved to the village of Grasmere, where they eventually settled at Dove Cottage in the village, his sister Dorothy, to whom he remained very close, moved in with them.

Dove Cottage was William Wordsworth's first home in the lakes, the poet, his wife Mary and sister Dorothy lived there from 1799 to 1808 and it is where he is believed to have written his best poetry. 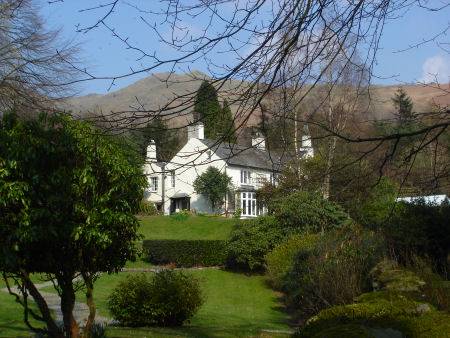 A tireless walker, he traversed the Lakeland fells ceaselessly on foot and wrote a pioneering guide book to the Lake District.

Local tradition states that when Sir Walter Scott stayed with the tee-total Wordsworth, who would not allow alcohol in the house, he would lock the door of his room, climb out of the window and make straight for the Swan Hotel, to which ends he was driven, to obtain his daily dram of Scotch whisky. The household it is reported, on entering the inn with him, were puzzled as to why all the staff appeared to greet him as an old friend.

The well tended, steeply sloping gardens were laid out by Wordsworth himself, he would often on rambles in the area, obtain wild flowers and ferns to replant there. The adjoining Wordsworth Museum, holds many of the poets original manuscripts and family portraits.

After vacating Dove Cottage, the Wordsworth's lived at nearby Allan Bank
, once referred to by the poet as a 'temple of abomination', as at the time he strongly felt it ruined the view of Grasmere, but later changed his views on the building and occupied it for a period of three years. They later lived at the Rectory at Grasmere, neither of these houses are open to the public.

The great poets best works were written between 1797-1808, in 1813, the family moved into Rydal Mount (pictured right) , which at first was rented from Lady Fleming of nearby Rydal Hall, but later purchased, they continued to live in the house for the rest of their lives.

An avid gardener, William landscaped the gardens himself. The Wordsworths were honoured with a royal visit in 1840, when Queen Adelaide, widow of William IV, called on them at Rydal Mount.

The house returned to the Wordsworth family in 1969, when Mary Henderson, nee Wordsworth, great-great grandaughter of William, bought Rydal Mount, opening it to the public the following year. The poet himself, a keen gardener, designed the informal garden, planting the trees carefully, so as not to spoil the views. The grounds cover four and a half acres, the highly attractive gardens containing a variety of rare shrubs, rhododendrons, daffodils and bluebells. 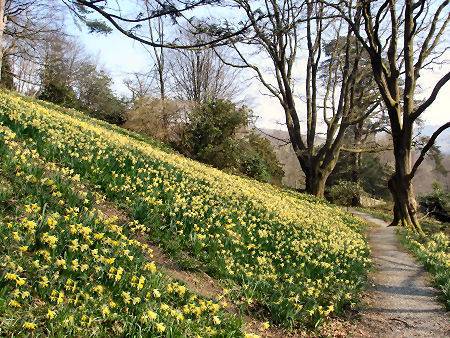 The tour of the house commences in the oldest part of the building, which dates back to the sixteenth century. The house contains a great deal of furniture which was owned by the Wordsworths and some excellent family portraits as well as personal items such as ice skates and picnic boxes. The views of Rydal Water and the Lakeland fells from the gardens are superb.

In 1843, on the death of Robert Southey, William was appointed Poet Laureate. Fate dealt a terrible blow when the Wordsworth's much loved daughter, Dora, died of tuberculosis in 1847, both William and Mary were crushed by their loss.

In nearby Dora's Field, bought by them some years previously and where they had intended to build a house, they planted a mass of daffodils to her memory, Dora's Field, at Rydal Village, is now owned by the National Trust.

It was during a visit to Gowbarrow, at Ullswater on Thursday, 15th April, 1802, that William was inspired to write what is perhaps one of his most famous and evocative poems, 'the Daffodils'.

Surprisingly, William was not alone, but had been accompanied by Dorothy on the excursion to the lake. Dorothy apparently wrote a description on the spot in her journal for that date reporting 'They tossed and reeled and danced and seemed as if they verily laughed with the wind that blew upon them over the lake.' William is reported to have relied upon her description when composing the famous poem. 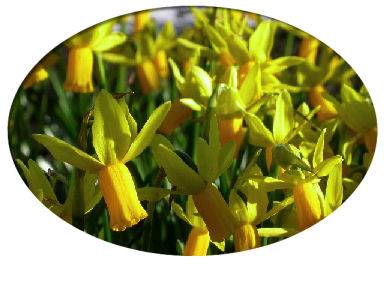 I wander'd lonely as a cloud
That floats on high o'er vales and hills,
When all at once I saw a crowd,
A host, of golden daffodils;
Beside the lake, beneath the trees,
Fluttering and dancing in the breeze.

Continuous as the stars that shine
and twinkle on the Milky Way,
They stretch'd in never-ending line
Along the margin of a bay:
Ten thousand saw I at a glance,
Tossing their heads in sprightly dance.

The waves beside them danced; but they
Out-did the sparkling waves in glee:
A poet could not but be gay,
In such a jocund company:
I gazed -- and gazed -- but little thought
What wealth the show to me had brought:

For oft, when on my couch I lie
In vacant or in pensive mood,
They flash upon that inward eye
Which is the bliss of solitude;
And then my heart with pleasure fills,
And dances with the daffodils.

William Wordsworth died after a heavy cold turned to pleurisy on St. George's Day, 23 April, 1850, at the time of his death he was considered one of England's greatest poets. He was buried at St. Oswald's Church, Grasmere, where the graves of he and his family, beneath a towering yew tree which was planted by him, can still be seen by the public. 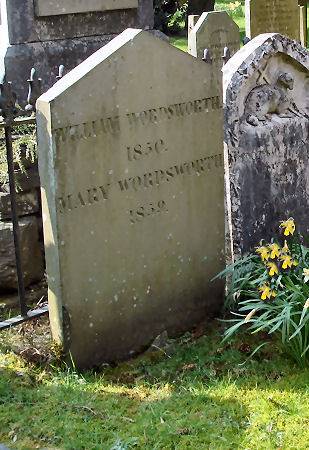