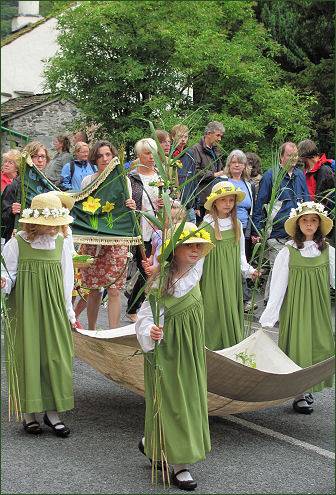 Grasmere's famous Rushbearing Ceremony, is centred on St Oswald's Church, in the village (pictured below right).

The ceremony has ancient origins. Originally the floors of Churches were simply composed of compacted earth, which was strewn with rushes. Rushbearing is a ceremony whereby the floor rushes in the church were renewed, the floor has been paved at Grasmere for many years but the tradition continues to be upheld..

The Rushbearing Ceremony is is held annualy and features a colourful procession through the village streets with bearings made from rushes and flowers. In this procession are six Maids of Honour, dressed in matching green costumes, carrying a white sheet holding the strewing rushes. A brass band, the church choir also contribute and all who wish to join in by carrying their own decorated rushbearing are allowed. 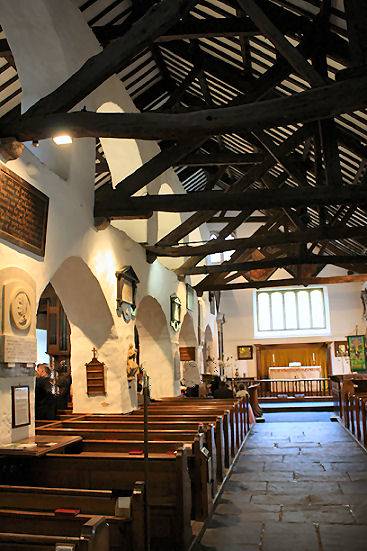 In 1887, the rushbearings were described as "tall poles decked with rushes and flowers" carried by boys and girls up to the age of fifteen. Crosses of rushes would be laid on the altar and would remain there for a week after the ceremony.

The festival was widespread in the British Isles from the Medieval era and is recorded as being well established by the time of William Shakespeare. It had fallen into decline by the beginning of the nineteenth century, as church floors began to be flagged with stone.

Canon Hardwicke Rawnsley in his 'Life and Nature at the English Lakes' described Ambleside's 1830s ceremony ' At six oclock in the evening of the last Saturday in July, we all met - a hundred or more - and then an old man played on his fiddle or his pipe, and off we went round the village, up street and down street, to the same old tune.We only knew one tune in those days - The Hunt is Up - and so up the hill to the old chapel. There we put our burdens into the corners of the big square pews, and left them till Sunday afternoon, and came back to the Cross for our gingerbread... Folk came for miles to see the procession, and Wordsworth never missed; he and the Rydal party would sit in our little room to see the procession start; and as for Hartley Coleridge, Owen Lloyd and Faber, nothing would do but they must go along with it; for Hartley loved children, and was, as you may almost say, a child amongst them.'

The ceremony is honoured at St Mary's in Ambleside with a 26-foot long mural containing 62 figures. A 1905 painting of the Grasmere rushbearing ceremony is displayed in Grasmere village hall.

Grasmere currently celebrates its rushbearing festival in mid-July (it was formerly held on the Saturday nearest August 5th).