The road through the bleak and rugged Kirkstone Pass snakes up through the fells flanked by near sheer scree slopes on either side. At 454m the Kirkstone road is the highest pass in the Lake District that is open to traffic, the gradient is 1 in 4 in places.

The Kirkstone Pass, looking north, with Brother's Water visible in the distance 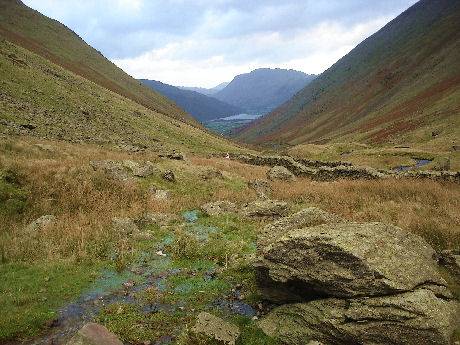 'Most potent when mists veil the sky,
Mists that distort and magnify;
While the coarse rushes, to the sweeping breeze,
Sigh forth their ancient melodies!'

A few yards from the roadside, stands the large stone from which the pass derives its name, the Kirkstone, a conspicuous landmark, it was so named as its silhouette resembles a church steeple. 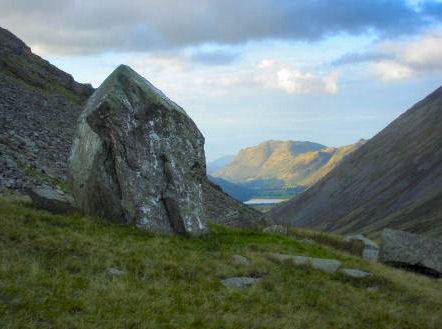 The views from the pass of Brothers Water are impressive. From Red Screes, at 2,547 feet, 776 metres above sea level, ( OS grid ref:- NY 396088) a superb view of all the major Lake District fells unfolds. The best ascent is via the path by the southern slopes, avoiding the screes, which are subject to erosion. There is a small tarn and a trig point at the summit. 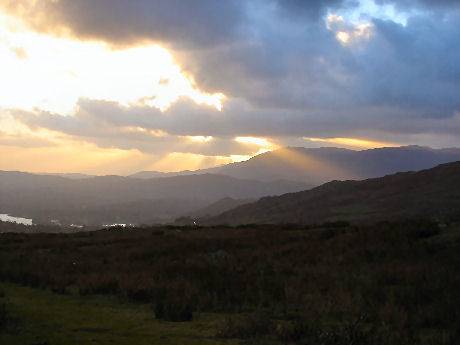 The Kirkstone Pass Inn stands in a solitary and windswept position at the top of the pass. Dating from the seventeenth century, it was formerly known as the Traveller's Inn and is purported to be haunted. One troublesome spirit is reputed to be that of a woman who attempted to travel the road in a fierce snowstorm and perished en-route. Her spirit is said to lurk about the building. 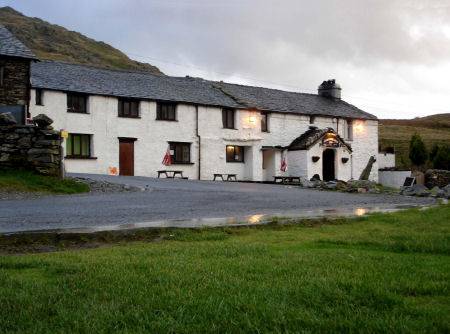 The Inn, which stands at 1489 feet, is the highest inhabited building in Cumbria and the third highest public house in England. The current structure was built A.D. 1496. It was formerly a coaching house but it now caters primarily to tourists and travellers. The inn was restored after having fallen derelict in 1847. The site was a monks retreat going back many centuries.

The inn offers bed and breakfast accommodation and good food.