William Wordsworth and his brother Richard were educated, after the death of their mother in 1778, at Hawkshead Grammar School. The school was founded in 1585, by a local man, Edwin Sandys (1519-1588), who was born in 1519 at nearby Esthwaite Hall. He endowed the school with sufficient land and property for it to offer a free education. Later Archbishop of York, Sandys spent time in prison, early in the reign of Queen Mary I, for his support of Lady Jane Grey. 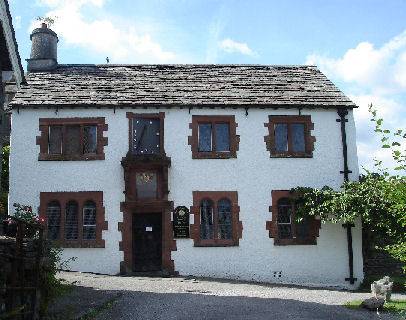 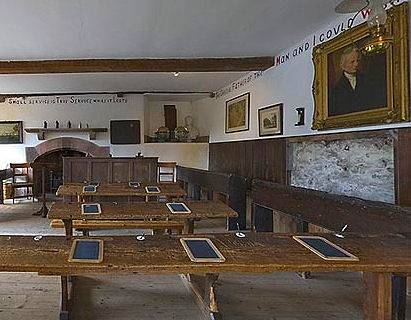 The building features unusual chimneys which resemble upturned tubs and a characterful old sundial mounted on the wall above the door. Inside can be seen the original desks, one of which can still be seen carved with the inscription of the poet. Wordsworth lodged at Ann Tyson's house in the village while attending the school. Other notable scholars at Hawkshead Grammar School School included Dr Christopher Wordsworth, Master of Trinity College, Cambridge, the poet's brother, Dr Joshua King, President of Queens' College, Cambridge; Lord Brougham, Lord Chancellor of England and Edward Baines, politician and newspaper proprietor.

A large portion of the young Wordsworth's education at Hawkshead was based on mathematics. The rest of the curriculum was based on teaching the classics, and it was during his classical studies that Wordsworth gained a love for Latin literature.

There is also an exhibition room, which houses a unique collection of historic artifacts relating to the school, some of which date back to the sixteenth century there is also a library.