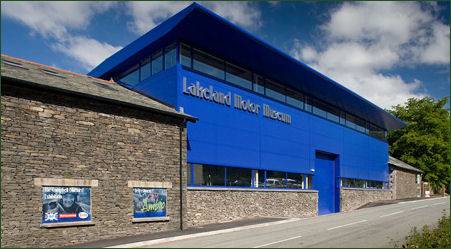 The Lakeland Motor Museum is situated at Backbarrow, in the scenic Leven Valley, which lies to the south west of Lake Windermere.

The museum, which is a VisitEngland Quality Assured visitor attraction, also boasts a Trip Advisor Certificate of Excellence. It houses a unique collection of classic cars, motorcycles, bicycles, tractors, pedal cars, and motoring related items and memorabilia. Highlights include an interesting exhibition dedicated to the land and water speed record activities of Sir Malcolm Campbell and his famous son Donald Campbell.

The Museum was first established by Donald Sidebottom in 1978 as an additional attraction at nearby Holker Hall. It contained cars and related memorabilia that he had been collecting since the 1960s. After more than thirty years at Holker Hall, the museum relocated in 2010 to its present site at the former Reckitt's Blue Dye Works carton packaging sheds at Backbarrow. 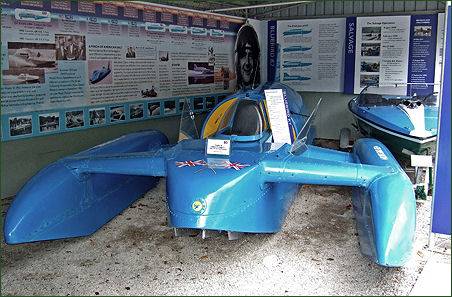 The Lakeland Motor Museum features a unique collection of over 30,000 motoring related exhibits including a 1920s garage re-creation. Amongst the cars in the museum's collection are a 1913 Star 15.9, a 1936 Bentley 4¼-litre which was owned by Donald Campbell, a World War II Willys Jeep and a 1955 Jaguar XK140.

The museum also houses the Campbell Legend Bluebird Exhibition which pays tribute to Sir Malcolm Campbell and his son Donald (1921 - 1967), who gained 21 World land and water speed records for Britain. The exhibition includes full size replicas of the Bluebird car which broke the world land speed record in 1935, and the famous Bluebird jet Hydroplane in which Donald Campbell was tragically killed while attempting to break his own World Water Speed Record on Coniston Water in 1967.

The mueum's replica of Bluebird K7 was commissioned by the BBC for the film entitled 'Across the Lake' starring Anthony Hopkins roled as Donald Campbell which was originally broadcast in September 1988.

In addition to its exhibits from the world of motoring, the museum also features displays about the local Lakeland motoring heritage, period shopping displays, electric cars and cycles, a 1950's cafe and the history of Old Blue Mill that now houses the collection.