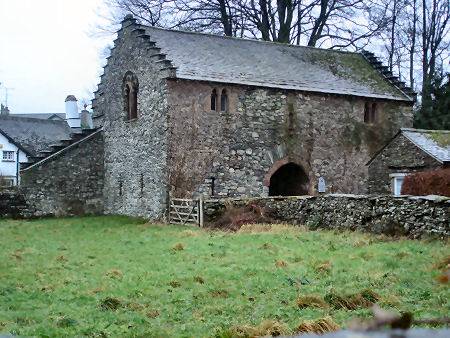 Medieval Hawkshead Old Courthouse, which dates to the fifteenth century, is all that now remains of the medieval manorial farm which formed part of the Cistercian grange.

The Old Courthouse which is scheduled as an ancient monument, is the only one of its kind in the Lake District. The building once belonged to Furness Abbey, in Low Furness, which held the manor of Hawkshead for over three hundred years. The Abbey was founded in 1124 for the order of Savigny by Stephen, Count of Blois, nephew of Henry I, and later King Stephen.

The roughcast stone building is the last remnant of a set of buildings that once formed a quadrangle. It consists of a gateway arch, with a room above the arch which was used as a 'sessions house' or place where the manorial courts were held, the lower floors were used as a farm building.

The court room measures 41 feet long and probably had a dais or raised floor where the Steward or Bailiff of the manor, or the Abbot himself, when he occasionally attended, would sit to meet the tenants, receive their rents and hear their grievances. The fireplace which features a three-centred arch and dogtooth moulding of the thirteenth century and is 200 years older than the building and may have been brought from Furness Abbey. 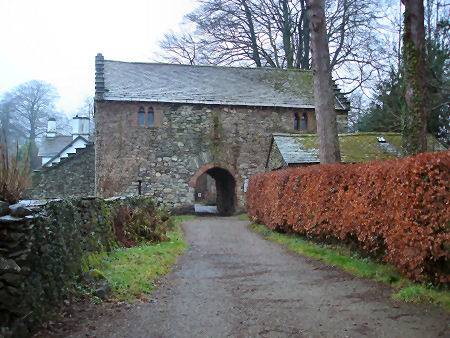 Eventually the whole building was converted for farm use. When Hawkshead Church was being restored in 1875 the courthouse was licensed for the holding of church services. The Old Courthouse was gifted to the National Trust in 1932 by its then owner Mr HS Cowper.

The Old Courthouse has stepped gable ends, and a long sloping buttress. Above the gateway arch is a statuary niche which would once have held a likeness of the Virgin Mary. Just above the arch is a much worn carving of a lion's head. After the Dissolution of the Monasteries under Henry VIII, the Old Courthouse served such diverse purposes as a chapel and stables.

To reach the Courthouse, proceed north along the road towards Ambleside, the Courthouse stands on the left immediately past the road to Coniston. The Courthouse is free to view, but is normally kept locked. The key can be obtained from the National Trust shop in Hawkshead village at the Beatrix Potter Gallery.