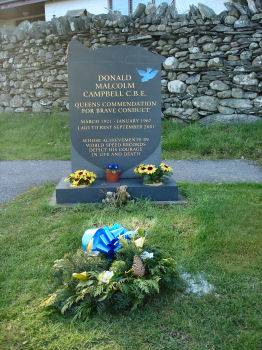 Donald Malcolm Campbell was born on 23rd March, 1921 at Horley, Surrey, he was the son of Sir Malcolm Campbell, who himself held 13 world speed records in the 1920s and 30s, Dorothy Evelyn Whittall, who was his second wife.

Donald Campbell married three times, his first wife, Daphne Harvey was the mother of his daughter Georgina, known as Gina, who was born in 1946. In 1952 he married Dorothy McKegg and finally, Tonia Bern in 1958.

After the death of his father in 1948, Donald attempted to set speed records on both land and water, using his father's boat, In September, 1951, Bluebird K4, while travelling at between 160-170 mph, K4 hit a submerged log and sank. It was replaced by Bluebird K7, a jet-propelled 3-point hydroplane.

In attempting to break his own water speed record of 276.3 m.p.h., Campbell reached a speed of 297m.p.h., on the first of two obligatory runs on Coniston Water on Wednesday 4th January 1967. On his return run travelling at a speed estimated to be in excess of 320m.p.h., his boat, Bluebird K7, somersaulted and plunged back into the water, nose first, disintegrating on impact. Campbell was killed instantly and his body had sunk to the bottom of Coniston Water. An exhaustive search was carried out, which failed to locate his remains.

On January 28th, 1967, it was announced that Donald Campbell had been awarded the Queen's Commendation for Brave Conduct, for 'his courage and determination in attacking the world water speed record'.

The remains of the Bluebird were located in 2001, after over four years of diving and surveying, by Bill Smith, an underwater surveyor from Newcastle. The remains lay at 150 feet half buried in silt. The wreckage of Bluebird was recovered from the lake on 28th March, 2001.

A body, found near to the remains of Bluebird, assumed to be that of Campbell himself was retrieved from the lake. In August 2001 the Barrow in Furness coroner came to the decision that based on DNA evidence the remains were those of Donald Campbell. After a funeral service at Coniston Village, attended by his wife and daughter, Gina Campbell, he was finally laid to rest in Coniston churchyard within the village.