Kendal, once popularly referred to as the 'Auld Grey Town' is an attractive market town and the southern gateway to the Lake District. Sprawling on both sides of the River Kent, it is the largest of the southern Cumbrian towns, steeped in history, Kendal has been a place of settlement since the Dark Ages.

The River Kent at Kendal and Kendal Castle from the town 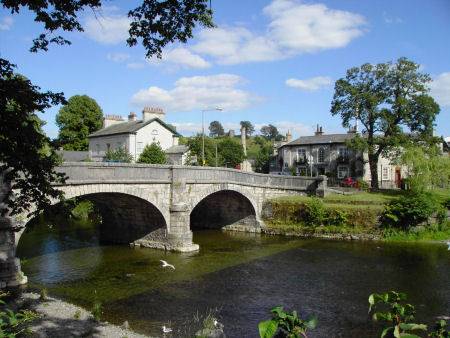 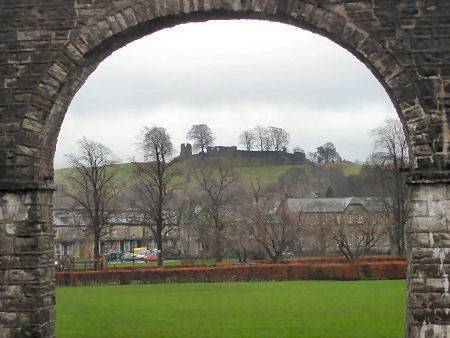 Kendal boasts a rich and varied history, the town is listed in the Domesday Book under Yorkshire, in which it is referred to by the name Cherchbi. It was later known as Kirkbie Kendal , which means "village with a church in the valley of the River Kent". The earliest castle was located at the west of the town , a Norman motte and bailey. Both the town and the Norman Castle eventually came into the possession of the aristocratic Parr family. It was at Kendal Castle that Catherine Parr, the sixth wife of Henry VIII, is purported to have been born in 1512.

Catherine was more skilful and lucky than some of her predecessors and fortunately survived her formidable spouse. Her silver bound prayer book still survives in the town hall. Most of the castle walls still survive and one of its towers. The castle ruins are now surrounded by a pleasant public park and offer excellent views of the town. Kendal also possesses an earlier motte and bailey castle, the earthwork of Castle Howe

Kendal became an important manufacturer of woollen cloth, with many mills sited along the river. Characterful old cobbled lanes branch off the town's main street. The yards of houses in Kendal were named after their owners, many of the yards ran down to the River Kent, once lined with weaving shops and dyeing works. The Castle Dairy is the oldest habitable building in the town and retains many of its fascinating period features, including a carved four poster bed. The building, which stands in Wildman Street, is open to the public. 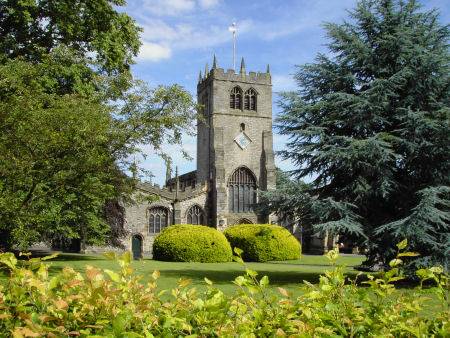 Kendal's Parish Church, Holy Trinity, with its five aisles and eighty feet tower, is the largest in England and is but 3 feet narrower than York Minster. The present church dates largely from the eighteenth century. Although much of its fabric was built 1400-1600, when the Kendal cloth trade was at its peak. 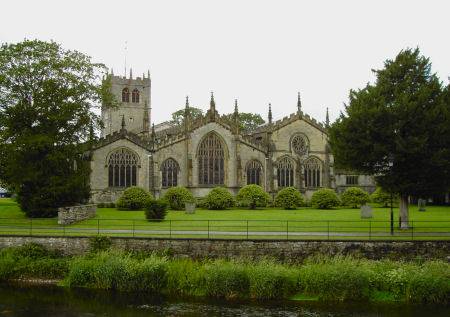 An earlier church is recorded in the Domesday Book, and a church has been known to exist on the site since as early as Saxon times. Holy Trinity has undergone much alteration through the centuries. Some of the earliest parts of the church date to the 13th century. Other parts date to the 15th and 16th centuries, and extensive re-building and re-modelling took place in the 1800’s. The earliest piece of stone work housed in the church is a 9th century piece of an Anglian cross shaft.

The churches Parr Chapel dates to the 14th Century. The Parr coat of arms is visible on the ceiling. The black marble tomb is reputed to be that of Katherine Parr's grandfather, Sir William Parr.


The centre of the town is built around a high street from which radiate fortified alleyways (known as yards ) In medieval times, these yards afforded shelter to the local population from Scottish raiders.

Kendal Town Hall dates from 1825, it was originally built as the White Hall, replacing an earlier building of the same name which occupied the site. This was believed to have been an exchange hall for Kendal's cloth trade. The White Hall was converted to the Town Hall in 1859. Extensive alterations and extensions were carried out in 1893, when the north section of the building was added. A new tower and eleven bells were added at this time, they were first rung for the Diamond Jubilee of Queen Victoria in 1897. 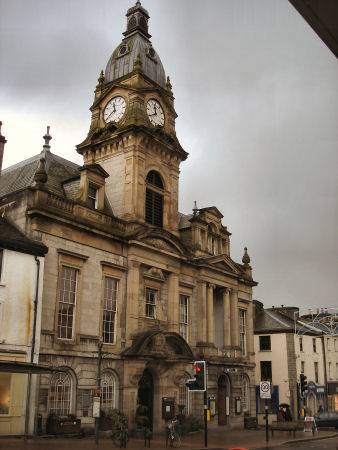 The Prayer Book of Catherine Parr, sixth wife of Henry VIII, which is kept at Kendal Town Hall 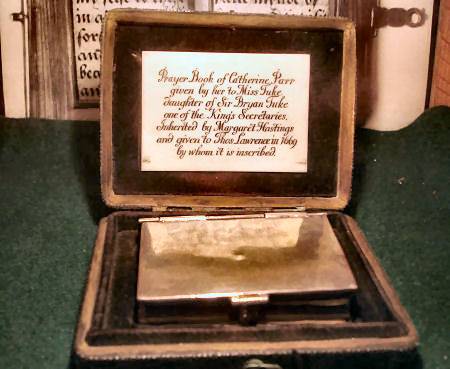 Kendal's historic Friends Meeting House houses the Quaker Tapestry. The tapestry, which makes an interesting day out and is well worth a visit, is a modern exhibition of embroidery, displayed in vivid colours, forming a chronicle of Quaker life over 350 years. It consists of 77 hand-crafted embroidery panels, beautifully illustrated by 4,000 men, women and children from 15 countries. There are also demonstrations of embroidery which depict how the tapestries were made, and a display of Quaker costumes. More on the Quaker Tapestry

The Kendal Museum of Archaeology and Natural History is situated near to the Railway Station, owned and managed by South Lakeland District Council, and one of the oldest museums in England, it was founded in 1796. The museum houses some interesting exhibits on the geology of the Lake District, an interactive Kendal Castle display, as well as exhibits charting Kendal's history from Roman times to the medieval era. The famous fellwalker and author of guidebooks on the Lake District, Alfred Wainwright, was Honorary Clerk and Curator to Kendal Museum from 1945-1974. Displays feature a reconstruction of his office and some of his original pen and ink drawings, as a fitting tribute to his life in the Lakes. 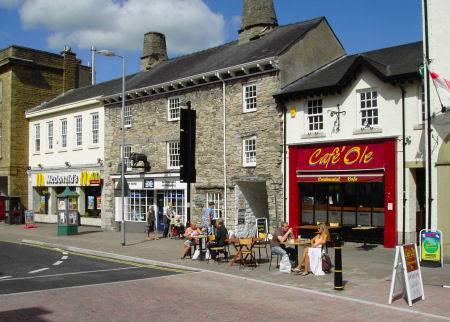 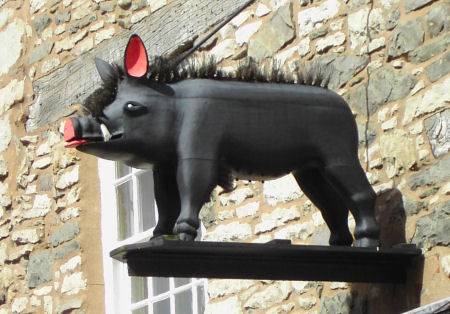 The famous Kendal 1657 Chocolate House stands above the cobbled streets of Branthwaite Brow and is reputed to date from the 1630's. it now serves as a shop selling a range of chocolates and gifts, including a Beatrix Potter range, employees still dress in period costume. Black Hall in the high strret, dates to 1575, and was once home to the first Alderman of the town.

The Museum of Lakeland Life award winning museum is housed in the stable block of the Georgian Abbot Hall Art Gallery located in a park beside the River Kent in the southern part of the town, it takes the visitor back in time to tell the story of the Lake District and its inhabitants.

Abbot Hall's fine collection of 18th, 19th and 20th Century art is set in an elegant Georgian villa. Lake District landscapes by Turner and Ruskin make up part of the collection. The permanent collection is complemented by a programme of critically acclaimed changing exhibitions.

At Abbot Hall  you can relax in the coffee shop where an apetising menu of locally produced food is freshly prepared daily. You can view changing exhibitions of artist's prints with a cappuccino or speciality tea. 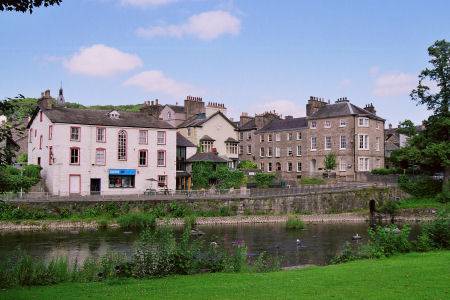 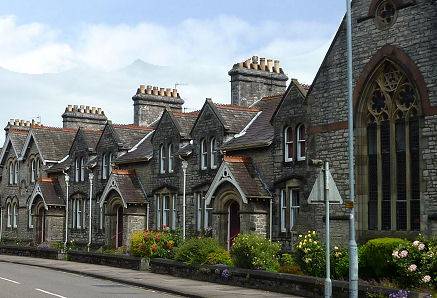 Kendal has an excellent shopping centre and is famous for its Kendal Mint Cake which is offered for sale to tourists in the shops throughout Lakeland.

At the Lakeland Wildlife Oasis, near the town, the visitor can experience a fascinating journey through the animal kingdom in an award winning wildlife centre. Exhibits include sea life, butterfly and tropical halls and many rare and tropical species.

*The Kendal Gathering, a large, well planned festival which runs for seventeen days, is held in late August. It provides varied entertainment and culminates with an atmospheric torch lit procession through the town.

*The Westmorland County Show is also held at Kendal on the second Thursday in September. It features an agricultural exhibition, crafts, farm produce and dog shows, as well as the sporting displays of show-jumping and the local Cumberland wrestling.