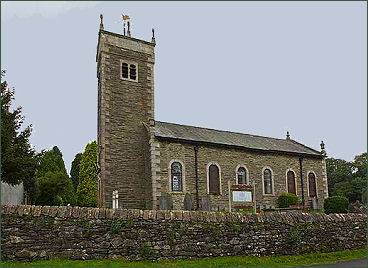 Historically a part of the county of Westmorland, the small, quiet south Lakeland village of Ings lies on the River Gowan and is situated between the town of Kendal and Lake Windermere and a mile from the village of Staveley.

Ings is a collection of stone cottages, some of them painted in the traditional Cumbrian white but the village's most notable landmark is its impressive parish church, the Church of St Ann, which dates back to 1743. The is a relative rarity in this part of the world, being of Georgian origin. Its nicely proportioned square tower and modest but avowedly Georgian entrance are elegant witnesses to an elegant era of architecture.

The detailed carvings of the oak reredos, pulpit, and lectern are of note and are the work of a local woodcarver, William Fell of Common Farm. The chancel floor is of Italian marble, possibly from the famous marble quarries at Carrara. The east window of the church represents the transfiguration and was designed by Edward Frampton. Over the door leading into the tower Bateman's coat of arms is displayed along with a memorial tablet recording Bateman's contribution to the building of the church. 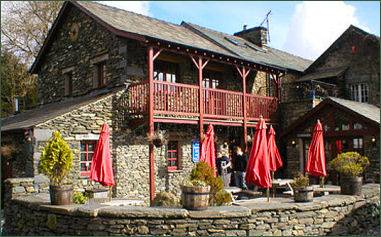 The building was funded by Robert Bateman, once a local, who became a wealthy London wine merchant, whose portrait is displayed on the North wall of the nave. He endowed a school in the village which now serves as Ings Parish Hall and stands across the lane from St Anne's Church.

Bateman also established a charity which provided fresh bread every Sunday for the poor of the parishes of Ings and Kendal. Loaves of bread were left on the wooden shelf which is now on the West wall of the nave of the church. The poet William Wordsworth visited St. Anne's church along with his wife Mary Hutchinson and his sister Dorothy, who recorded their visit in her journal.

The village pub, the Watermill (pictured left) has its own award winning brewery on the premises and brews excellent beers. The inn also offers four star accomodation and excellent food.