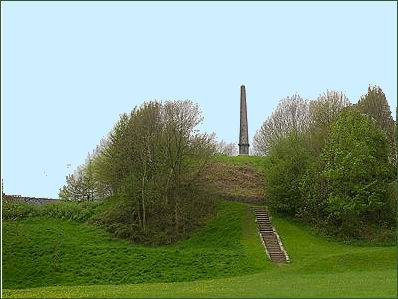 Dating back to the eleventh century, Castle Howe is an earthwork motte and bailey fortification at the town of Kendal, it pre-dates Kendal Castle and was the first castle to be built in the town.

The small, tree covered mound also features a 1788 obelisk, which commemorates the centenary of the Glorious Revolution of 1688, when the Protestant William III and Mary II, took the throne from Mary's Catholic father, King James II.

The mound is around 11 metres in height and about 18 metres across at the summit and slopes to 46 metres diameter at its base. Steps are built into the motte to enable visitors climb to the monument. A small triangular shaped area of level ground, which was once the bailey, lies at the base of the mound.

Castle Howe is believed to have been first fortified in around 1092, when King William II attempted to push the frontier of England north into Scotland. The castle may have been built by been Ivo de Taillebois, a powerful Norman nobleman, who was granted the Barony of Kendal by William, which then consisted of a sizable portion of Westmorland. Ivo was supported William II's father, William the Conqueror, when as Duke of Normandy he launched his invasion of England in 1066.

The motte was constructed on a natural ridge and was strengthened by earthwork banks and ditches. It was protected by a timber pallisade around the summit of the mound, which surrounded a wooden keep, and a similiar pallisade would have encircled the bailey, where timber service buildings would have stood. Nothing now remains of these wooden buildings.

In the early thirteenth century,Castle Howe site was abandoned in favour of Castle Hill, across the river, which Kendal Castle now occupies.

The site is managed by the South Lakeland District Council.