Whitbarrow Scar, a long and abrupt prominent carboniferous limestone scar, lies a mile the north east of the village of Witherslack and is just off the A590. The summit of the Scar, is known as Lord's Seat, from which there are excelent views of the southern Lake district and Morecambe Bay, the scar stands at a height of 203 metres ( 666 feet). 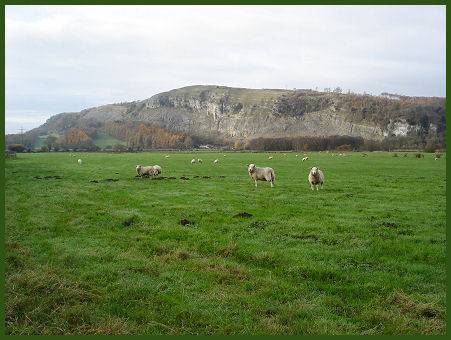 The scar is composed of limestone - extremely rare in the Lake District. Of great interest to the naturalist, it provides the perfect environment for rare flora and fauna. The Scar is a mixture of woodland, grassland and limestone pavement, its steep limestone cliffs, were formed in the Carboniferous period, some 350 million years ago. The main cliff faces are made up of rocks known as Dalton Beds, above which are Urswick Limestones, of which the limestone pavement have been formed.

Whitbarrow is a National Nature Reserve managed by the Cumbria Wildlife Trust and Forestry Commission. The reserve is rich in wildlife. High brown, dark green, pearl-bordered and small pearl-bordered fritillaries all breed there as do northern brown argus, grayling, common blue and small heath butterflies. Breeding birds include the meadow pipit, both green and great spotted woodpecker and redstart. Roe, and occasionally red deer, are sometimes sighted. Much of the reserve is dominated by blue moor-grass which, outside the Morecambe Bay area, is extremely rare.

There are public footpaths across the scar, but these are closed during the breeding season.


A walk to Whitbarrow Scar from Mill Side

* Commencing from the small village of Mil Side (off the A590), proceed along the farm track marked 'public footpath' which heads in a northerly direction. Pass through the farm cross a stile and enter woodland.

*Turn right where the track meets a further path and continue. On arriving at Rawsons Farm take a left turn left past the house. The path then ascends steeply into woodland.

*On reaching a crossroads turn right and continue along the route to Barney Crags. After continuing for around 200 metres take a left turn and remain on the path.

*On reaching the summit of Whitbarrow Scar, views encompass Morecambe Bay to the south, the Isle of Man to the west and Yorkshire to the east. On a clear day the mountains of North Wales are visible.

*Retrace your steps to return to Mill Side.