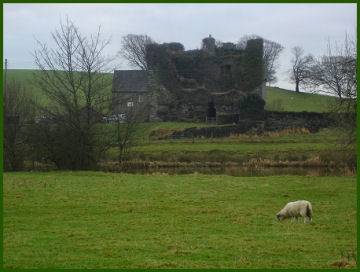 Atmospheric Burneside Hall, a ruined pele tower dating to the fourteenth century, lies on the outskirts of the village of Burneside, which stands to the north of the town of Kendal and east of the Kentmere Valley.

Pele Towers were a fortification used to guard against Scottish border raiders. Such towers were once fairly common in Cumbria and other northern English counties. The tower, with stone rubble walls with quoins, is now attached to a farm house and outbuildings. The tower and gatehouse date to 1341 when a licence was acquired to fortify the building. The structure consists of a long south wing and a shorter rectangular shaped north wing, which forms the pele tower and was constructed by the local Burneshead family.

There are two tunnel-vaulted chambers at ground level, separated by a narrow tunnel-vaulted passage. Much of the fourteenth century tower still survives to the present day, as well as some of the original enclosing wall of the fortified courtyard, known as the barmkyn, this area would have been used in the medieval era to protect cattle in the event of a raid.

The entrance would have been via a gate house from the sixteenth century onwards, which survives to the present day, although its windows are broken. What is believed to be the original heavy oak doors of the gate house have similarly survived, although they now stand off their hinges and lean against an interior wall of the building.

The hall came into the possesion of Richard de Bellingham of Northumberland through his marriage to Margaret, the heiress of Gilbert de Burneshead. Their descendants continued to occupy the hall for around the following 200 years. Attached to the rear of the pele tower is the Great Hall, which most likely dates to the sixteenth century and was built by the Bellingham family. It was enlarged during the seventeenth century by the Braithwaites who later owned the property.