Founded in 1796, Kendal Museum's fascinating collections include local archaeology, history, geology and natural history from around the world. The museum also hosts exhibitions, displays and offers a range of activities, talks and courses. Owned and managed by South Lakeland District Council, it one of the oldest museums in England 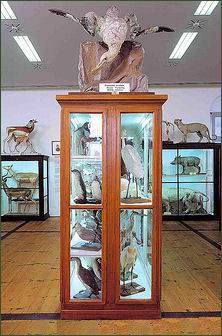 The museum's first collection was assembled in 1796 by William Todhunter and contained fossils, plants, minerals, animals, and antiques.

The present Museum is based on that collection and was opened after World War I in a former wool warehouse opposite the railway station in Staion Road.

The history of the Kendal area from prehistoric times to modern age is charted covered. The historic and archaeological gallery features prehistoric, Viking, and medieval times artefacts along with a display on Kendal Castle.

The interesting Natural History Gallery describes the geology of the Lake District from 520 million years ago, while the World Wildlife Gallery features animals, insect life, and the environment. There is also an outdoor wildlife garden.

The famous fellwalker and author of guidebooks on the Lake District, Alfred Wainwright, was Honorary Clerk and Curator to Kendal Museum from 1945-1974.