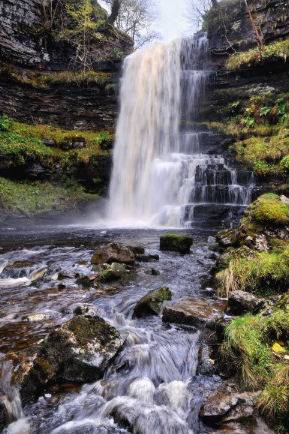 Impressive Uldale Force in North East Cumbria is located around six miles from the town of Sedbergh, and lies on the juvenile River Rawthey as it tumbles from Baugh Fell.

Remote and inaccessible, the force is one of Cumbria's hidden gems. Situated in a rocky bowl, Uldale Force is one of a series of waterfalls that feature on this section of the River Rawthey. On the main fall, the River drops about fifteen metres. The easiest access to the force is on the path which leads up from Rawthey Bridge

The headwaters of the River Rawthey are found at Rawthey Gill Foot, where Rawthey Gill, which finds its source at a confluence at Gill Head on East Baugh Fell, meets Haskhaw Gill.

At first moving northwards, the River Rawthey collects the waters of Whin Stone Gill in Uldale before skirting round Bluecaster, after which the river moves south-by-southwest through Cautley.