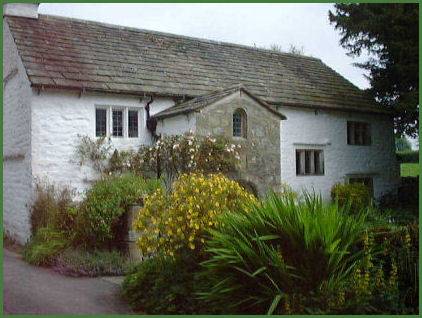 The Quaker Meeting House at Briggflatts, to the south of Sedbergh bears the distinction of being the oldest in northern England.

Constructed in 1675, the building is considered as one of England’s vernacular gems. The characterful stone lime washed building is set in a small garden and surrounded by fields.

George Fox (July 1624 – 13 January 1691), the founder of the Quaker movement or Society of Friends, preached extensively in northern England in 1652. In June of that year he preached in the churchyard of St. Andrew's church at Sedbergh and later at a great open-air meeting on Firbank Fell, the crag upon which he preached is now known as Fox's Pulpit

Fox organised a permanent Quaker meeting at Brigflatts later in 1652 and the Meeting House was constructed 23 years later. The land was purchased for ten shillings (50p) and the buildIng constructed by the Quaker congregation in the plain and undecorated style of local farmhouses of that period. The oak outer door, which still survives in place today, was added in 1706, the burial ground was enlarged during the same year.

. In 1677 George Fox returned to Briggflatts with his wife Margaret, (formerly Fell). The Meeting House was restored in 1997.


Further information on Quakers in Cumbria