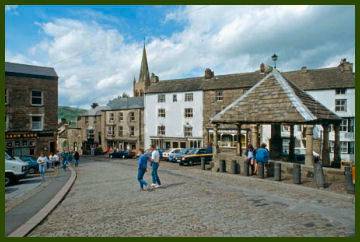 The small and isolated market town of Alston in Cumbria's Eden district stands at around 1000 feet (300 m) above sea level, giving it the distinction of being the highest market town in England.

In the 18th and 19th centuries this part of the North Pennines was a world renowned centre for lead mining. The characterful town retains its cobbled streets, seventeenth century stone buildings and attractive market cross and there are a number of interesting craft, gift and antique shops. The original market cross was destroyed when a runaway lorry careered down Alston's steep streets demolishing it. 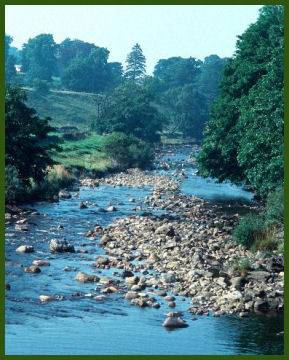 A restored watermill stands in the town centre. The first mill on the site, which dated to the 1300's was replaced in 1767. The library was built in 1821 to commemorate the coronation of King George IV.

Alston's St. Augustine's church dates from 1869 and boasts a one handed, sixteenth century clock, which was once owned by the Earl of Derwentwater, and used at his home at Dilston Hall. The Earl of Derwentwater also donated the church bell, which was cast in 1714, it was recast in 1845. The oak chancel screen dates from 1920 and serves as Alston's War Memorial to those who died in the 1st World War. A church has occupied the spot since the twelfth century. All that remains of the previous church, a few decorated stones, are displayed in the church porch.

The narrow gauge South Tynedale Railway operates trips along the 2¼ mile line scenic South Tyne valley between Alston, in Cumbria and Kirkhaugh, in Northumberland. The narrow gauge line is built along part of the railway trackbed of the former 13 mile long standard gauge Haltwhistle to Alston branch, which was closed by British Rail in 1976. Alston Station has a pleasant riverside setting and the train tickets are sold from the restored Victorian station building.

Alston's main street and market cross were used in the filming of Jane Eyre.

A number of long distance paths pass near the high Pennine town, including the Pennine Way, and the Sea to Sea Cycle Route (C2C) Cycle Route.