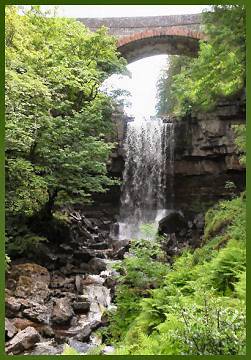 Ashgill Force is located near to the small and attractive Pennine village of Garrigill and around four miles from the isolated market town of Alston in Cumbria's Eden District. The force is the highest waterfall in the area. Ashgill was once an industrial landscape where high quality lead was mined.

Ashgill Burn begins its life as a small stream known as Little Gill, it finds its source at a height of more than 2,300 feet on the northwestern slopes of Burnhope Seat in the North Pennine Hills. The gill descends into a steep gorge as it reaches the Pennine road from Alston to Middleton-in-Teesdale (B6277) and below the road bridge the gill falls a spectacular fifty feet from a rock shelf into a pool in the wooded valley below.

The force is not visible from the road. It is possible to walk behind the waterfall and remain dry where the sedimentary rocks laid down when the area was covered by the "Midlands Sea" can be seen. Geologists across the world refer to this type of rock formation as the Ashgill Event.

Nearby Thortergill Force, at Beldy is also worth a visit. The waterfall was formerly known to locals as Lady's Walk, there is now an admission charge to see the waterfall at Thortergill.