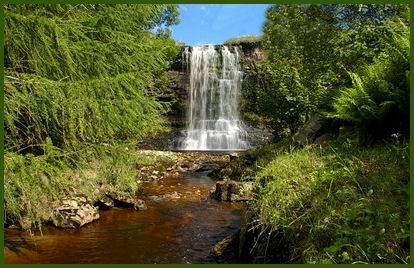 Dynamic Hell Gill Force, the highest waterfall on the River Eden, is situated on Hell Gill Beck at Mallerstang Dale.

Mallerstang Dale lies in Cumbria, but is part of the Yorkshire Dales National Park.

The waterfall is a single drop fall of around 8 metres (25 feet). Hell Gill, which begins its life as Red Gill, is fed by water rising from the High Seat range of fells and marks the county boundary between Cumbria and Yorkshire. The waterfall is close to the source of the River Eden. Two other rivers arise in the same peat bogs within a kilometer of each other, the River Swale and River Ure.