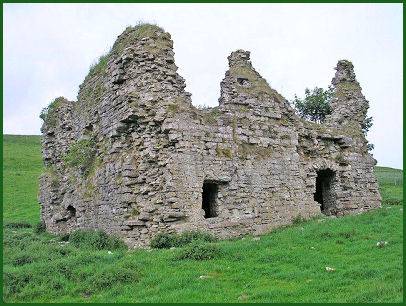 Dating from the twelfth century, Lammerside Castle stands above the River Eden in remote Mallerstang Dale. The name may have derived from a corruption of 'Lamberts Keep', the castle was referred to by John Lambert in his book "A tour from Downing to Alston Moor" (published in 1801) as the "Dolorous Tower".

The castle was rebuilt as a pele tower in the fourteenth century, pele towers were erected throughout the north of England in the middle ages to provide protection against Scottish border raiders, a common feature of life in the north in those turbulent times.

Once occupied by the Wharton family, Lammerside Castle is thought to have been abandoned in the seventeenth century when the Whartons moved to nearby Wharton Hall, a fortified manor house situated around two kilometres to the north. The castle is believed to have previously been in the possession of the Warcop family.

The ruins consist of the fourteenth century towe, built of course, squared stone rubble, which survives to a height of two stories and measures 14 metres by eleven metres. The structure has an interesting vaulted cellar and stone ceilings. The earthwork remains of further buildings lie to the north and south of the tower.

Lammerside Castle stands off the A683 road through Mallerstang Dale, and can be accessed by following the road leading to Croop Farm, at which point a public footpath leads to the castle.