The village lies on the old Walna Scar road, the poet William Wordsworth visited Seathwaite and stayed at the characterful sixteenth century Newfield Inn in the village. The pub remains popular with walkers and serves fine hearty food in a warm, friendly atmosphere.

The village Church of the Holy Trinity (pictured left) occupies the site of a previous church constructed in the early sixteenth century. Wordsworth visited the church and dedicated one of his Duddon Sonnets to the Reverend Robert Walker (1709-1802) who was parson at Holy Trinity Church for a total of 66 years and died at the remarkable age of 92. Inside the church a simple memorial plaque to Walker can be seen, he was known as "Wonderful Walker" because of his long ministry and many acts of charity. The present building dates to 1874. Outside the church is the stone used by Walker for clipping sheep.

Bleak Seathwaite Tarn (OS grid ref SD 2598) sits in a deep glaciated combe. The four hundred yard long dam was built in 1904, to supply the town of Barrow-in-Furness with its water. The workers employed in its construction, caused a riot at the Newfield Inn resulting in a man being shot dead and the windows of the church were vandalised. On the rocky slopes of Brim Fell, which stands above the head of the tarn, are the remains of Seathwaite Tarn Mine. Copper was extracted from the mine in the mid nineteenth century, it also features as a location in the novel The Plague Dogs by Richard Adams.


A walk in the Duddon Valley from Seathwaite 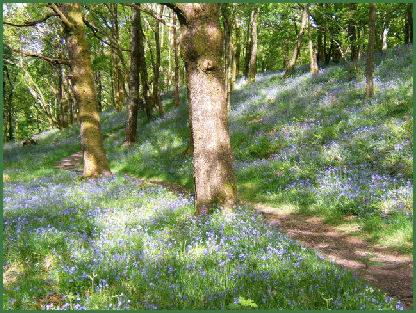 *Commencing at the Newfield Inn at Seathwaite turn right and follow the road passing Seathwaite Church. After around a mile turn right along the track signposted 'Coniston unfit for cars.'

*Bear left towards Hollin House on reaching a fork, pass Hollin House to eventually arrive at Tongue House Farm. Follow the lane around the back of the cottage and turn left infront of the barn. Pass through a gate and proceed up along the field road, following the line of the wall on the right.

*After around 200 yards cross a stile and turn right, following Tarn Beck upstream to reach a series of waterfalls. Cross the stream and follow the path marked by the ladder stile and proceed to the gate in the wall ahead. After around fifty yards turn right.

*Climb the hill to join the line of the wall across the fellside. Turn left keeping the wall to your right and follow it to a small crag at the top corner of a fir plantation. As the path reaches the edge of the woodland, go down the hillside for a few yards, pass throught the gap in the wall on the right and turn left.

*Descend along the path between the wall and a wire fence. At the bottom cross a stile and turn left, the path winds up through trees. Once over the crest of the hill turn right with the path away from the wall and continue through the wood. Turn left on arriving at a forestry road, turn left again on reaching a minor road. Continue along this road until reaching a public bridleway sign at which point turn right to arrive at Birk's Bridge, a packhorse bridge over the River Duddon.

*Cross the bridge, bear left and follow the path marked Seathwaite and Wallowbarrow. Cross a stile and take the path which angles upo the fellside. Descend the hill towards the river, passing through woods. Bear left at the waymarker to reach the river and walk downstream. Follow the waymarkers for Seathwaite and Wallowbarrow. Cross a stile and a footbridge and folow the signs along the line of the fence, climbing up away from the river and stay on the path to reach a boulder strewn area at the foot of Wallbarrow Crag.

*Climb the stile at the far end of the boulders and cross the River Duddon via the slate footbridge and follow the path ahead. Cross the mill leatand the wooden footbridge over Tarn Beck. Follow the path across the field, passing through a gate beside a farm to arrive back at the starting point of the walk in Seathwaite.