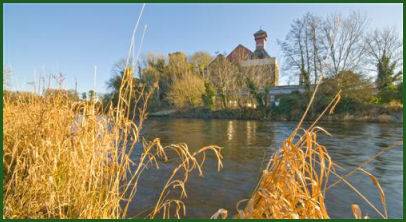 Jennings Brewery, which is well worth a visit, stands in the shadow of Cockermouth's historic Castle. The brewery was originally founded a 180 years ago in 1828, by John Jennings Senior, a farmer in the Lorton area. John's father William was a maltster, John Jennings himself set up his business, a family concern, in the West Cumbrian village of Lorton.

The company had moved to its present riverside location in the town of Cockermouth by 1874.

To the present day, pure Lakeland water is still used in the brewing process, Jennings Brewery produce a range of ales using water drawn from the brewery's own well and only the finest ingredients are added, including malt made from Maris Otter barley grown in Norfolk, Golding hops from Kent and Fuggles hops from Herefordshire. The malt used by the company is screened and crushed instead of ground into a flour to keep the husks as whole as possible. 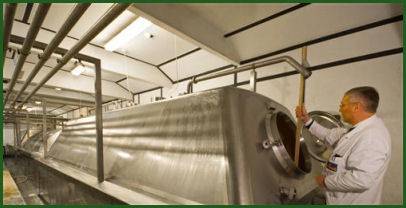 The traditional values which the Jennings family instilled in the business are still respected, and combined with a modern commercial approach, they have undoubtedly contributed to the success of Jennings ales today.

In May 2005 Jennings Brewery was purchased by the national brewer, Wolverhampton & Dudley Breweries, renamed Marston's PLC in January 2007.

Jennings offer interesting friendly guided tours of the brewery, the duration of the tour is about one and half hours and is completed by sampling the Lakeland ales in the brewery's Cooperage bar.