Spectacular Scale Force, to the south of Crummock Water, and near to the village of Buttermere, is situated on a stream which flows into the lake, is the highest waterfall in the Lake District. It consists of a single drop of water of 120 feet and other drops, which in all plunge 170 feet down a wooded ravine. 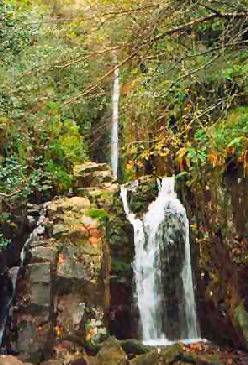 A Walk to Scale Force from Buttermere

*Commencing from the Fish Hotel in Buttermere, follow the route to Scale Bridge. Cross the bridge and turn right, follow the path across a number of streams until reaching Near Ruddy Beck. Cross the beck via the footbridge and drop down to the lower path, which leads to another footbridge crossing Scale Beck.

* After crossing the bridge, continue along the path which passes some ruined sheepfolds, the path rises gently, passing the junction of Scale Beck and its tributary Black Beck A few hundred metres on Scale Force comes into view.

*Pass between two iron posts at the top of the spur and cross the wooden footbridge, before scrambling upwards to view Scale Force.