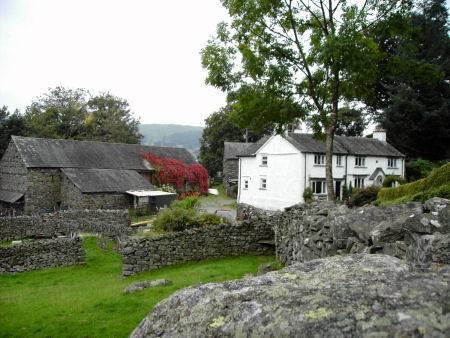 The curiously named hamlet of Boot lies in beautiful Eskdale, and is siutuated at the end of the bleak and dramatic Hardknott Pass.

A white oasis lying amidst dark towering crags, the hamlet is of ancient origin and is mentioned in the Domesday Book of 1086. Boot grew up with the discovery of iron-ore in the surrounding area. Mining was carried out there until the mid twentieth century.

Boot now consists of a few pretty stone and whitewashed cottages, a general store, a post office and a small art gallery, which cluster around the Woolpack Inn. The quaint stone packhorse bridge which crosses Whillan Beck dates back to the seventeenth century.

The hamlet has a number of inns which offer accommodation, as well as bed and breakfast establishments. The Woolpack Inn has an adjoining brewery which is known as the Hardknott Brewery. Its beers are normally only available at the pub, which also serves excellent food. The Boot Inn, a traditional Lakeland Inn, boasts a characterful beamed restaurant which dates back to the sixteenth century.

Eskdale Mill in the village was restored in 1975, it dates from at least 1578 and is open to the public. Set on the banks of fast flowing Whillan Beck, which cascades down from the flanks of Scafell, Eskdale Mill still boasts its historic working machinery. The Mill is one of the oldest water powered corn mills in England, and is now the last remaining working mill in the Lake District. This historic building and its unique machinery, has been Grade2 listed and is a vital survivor of a vanishing heritage.

Fold End Gallery, which is housed in a converted barn, exhibits crafts and is open to the public. Nearby St. Catherine's Church dates back to the twelfth century, standing in the shadows of England's highest mountain, Scafell Pike (3,210 feet), the small church has a number of interesting features including an octagonal font, which among its decorations has ancient marigold designs found on Roman pagan altars and early Christian tombstones, as well as some interesting stained glass windows.

The Eskdale end of the Ravenglass & Eskdale Railway terminates at the nearby Dalegarth station (pictured right), facilities at the station include a tea-shop, turntable and large car park.The railway runs for seven-miles from the coastal village of Ravenglass in the Western Lake District through some of England's most magnificent scenery to Dalegarth Station and makes a novel and exciting day out.

The nearby waterfall of Stanley Ghyll Force is reputed to be one of the most beautiful falls in the Lake District. The Force comprises of a sixty feet drop, dramatically situated in a 150' deep, narrow ravine. Rhododendrons grow wild on the ledges and precipes surrounding the waterfall.