Ritson's Force consists of a series of waterfalls in the peaceful Mosedale Valley The falls are situated on the river that leads past the Wasdale Head Inn and the Great Gable Brewing Company. 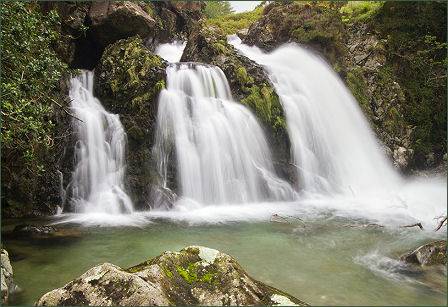 The waterfall is said to be named after Will Ritson, landlord and tall tale teller at the Wasdale Head Inn. The surrounding mountains include panoramic Sca Fell and Scafell Pike, England's two highest mountains, and the distinctive pyramidal shaped peak of Great Gable, rising to 2,949 feet (899m), it is one of Lakeland's most popular fells.

To access the force go through the back of the beer garden then cross a stone bridge, continue to follow the track up the field and proceed through a gap in the stone wall up to a group of trees up the hill. On reaching the trees there is a wooden gate which leads down to Ritsons Force waterfall.