The stunning, wild and remote Ennerdale Valley or the Valley of the River Liza, is situated around ten miles inland of the coast at Whitehaven and extends for seven miles from Bowness Knott inland to the summit of Great Gable.

Ennerdale Forest is one of the largest forests in the county of Cumbria and has an extensive network of public rights of way, forest roads, tracks and trails for the visitor to enjoy, the forest is rarely busy and presents a superb location for walking and cycling. The higher ridges of Ennerdale Forest provide some of the western Lake District's finest views, including Wasdale and Buttermere. The car parks at Bleach Green and Bowness Knott both offer similarly good starting points for walks and cycle rides in the forest. Maps are available from self service boxes at the Bowness Knott car park. 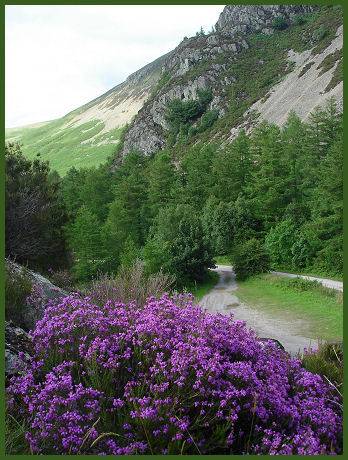 Planting began in Ennerdale Forest in 1926 and was largely completed by 1950. The principal species of trees are Norway Spruce, Sitka Spruce, European and Japanese Larch. Objections were raised when the Forestry Commission planted the extremely straight lines of Ennerdale Forest around Enerdale Water, since then the Commision have agreed not to continue this policy within the Lake District National Park.

Roe deer inhabit the forest and can occasionally be seen, the best time to spot them is either at dawn and dusk. The rare Red Squirrel may also be sighted especially around Gillerthwaite. The forest is also home to a variety of birds including Peregrine falcon, Raven, Buzzard, Kestrel and Heron.

The Ennerdale area is inhabited by one of the smallest birds in Europe, the Goldcrest (Regulus regulus). It is only three and a half inches long and as its name suggests its head bears a gold crest, The black-bordered crest stripe is orange in the male and yellow in the female, the body is olive green above and creamy-white below, their song is particularly high-pitched. Nesting commences in late April. The bird is, however, seldom seen as it spends most of its time in the high treetops.

Moss Dub Tarn within the forest, a shallow tarn, surrounded by larches, makes for a pleasant walk. The tarn is thought to be a remnant of a former great lake, as during the Ice Age, Ennerdale Water reached much further up the fell sides than it does today.

Wild Ennerdale, a partnership of the Forestry Commission, the National Trust and United Utilities was formed in 2002 with the vision "to allow the evolution of Ennerdale as a wild valley for the benefit of people relying more on natural processes to shape its landscape and ecology"


A walk at Ennerdale Forest

*Commencing at the car park at Bowness Knott, climb the knoll between the car park and Ennerdale Water, proceeding toward the lake shore, turn left and follow one of the paths up the lake.

*Continue along the forestry road, stay on this road upon reaching the head of the lake. When a footbridge which spans the River Liza below comes into view, take the steep track which leads down to a gate near the bridge. Proceed down this track, crossing a stile by the gate and cross the footbridge. Bear left and pass through the gap in the wall, follow the fence on the left, which later becomes a wall, continue to follow the course of the wall until reaching the corner of a forestry plantation. Enter the plantation through the gate.

* Proceed straight on until reaching until a path branches of to the right, follow this path and pass through the gate at the end of it. Pass through the wall gap and follow the path through the bracken and make for the lake shore path. Pass over a beck, through a wall gap, and keep to the left . Cross a further two becks, and enter into wood. Eventually reaching a wall. Pass through a wicket gate and continue on. Coming out of the wood, keep to the upper path.

*Pass a car park and continue to follow the lakeshore eventually crossing a bridge. The track then returns to the starting point of the Bowness Knott car park.