Buttermere, which derives its name from a corruption of 'Boethar', a Norse chieftain who bestowed his name on the lake, is approached via the bleak Honister Pass. The lake, which is one and a half miles long , just under a mile across at its widest point, and over 90 feet deep, was divided from adjacent Crummock Water when a larger lake silted up at its centre. 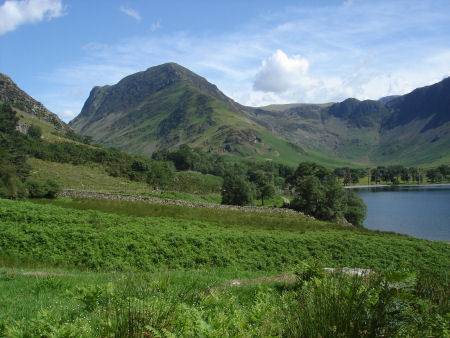 There is a footpath which circumnavigates the lake. Buttermere is surrounded by the dramatic high fells of Red Pike, High Stile, Scarf Gap and High Crag. To the south of the lake stand Warnscale (which derives from the old Norse 'Skali'- summer pastures) Haystacks, and Fleetwith Pike. Haystacks at 1,959 feet (597metres) is perhaps the easiest summit in the ridge to climb and is an impressive and inspiring sight, it was one of Alfred Wainwright's favourite mountains. (OS grid ref:- NY194132) Its summit has a profusion of small pools, tarns and marshland. The best views of the lake are from the west across to Fleetwith Pike 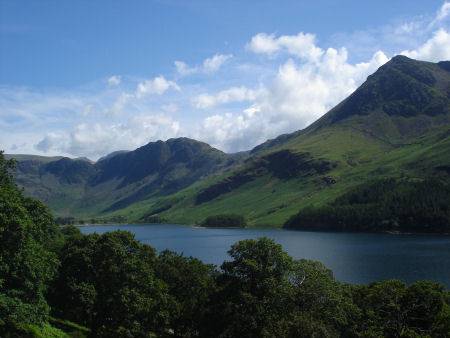 The area saw large settlement of Vikings in the 9th and 10th centuries and many names of Norse origin linger in the area, streams are termed becks, from the Old Norse 'bekr', mountains are 'fells' from the Norse fjall, waterfalls forces (fos), ravines 'gills' and small lakes are termed tarns which derives from 'tjorn', meaning teardrop.

Nearby Rannerdale is famous for its spring carpet of bluebells. Rannerdale Knotts at 1160ft, can be accessed from Buttermere village, its summit offers superb views of Crummock Water, Buttermere and the surrounding fells. Sometimes referred to as the 'Secret Valley', this area is said to be the site of a battle at which native Cumbrians and Norsemen ambushed and defeated Norman armies in the century after they conquered England in 1066. Local historian and publican Nicholas Size published a historical novel about Cumbric resistance to the Norman invaders in 1930 called 'The Secret Valley'. Bluebells flower in profusion in this valley in April and May, local folklore states they sprung from the spilt blood of the slain Norman warriors. A Norman army under the command of Ranulph les Meschines, Earl of Carlisle, advanced south from Cockermouth, the Cumbrians were under the command of Earl Boethar, who succeeded in drawing the Normans into the side valley of Rannerdale, then routed them with a surprise attack from above and behind.

Most of the Buttermere and the land surrounding it are owned by the National Trust. Buttermere contains trout and char, a species left over from the Ice Age. One of the most popular walks around the lake is the one to Scale Force, the highest waterfall in the Lake District.

The Hamlet of Buttermere