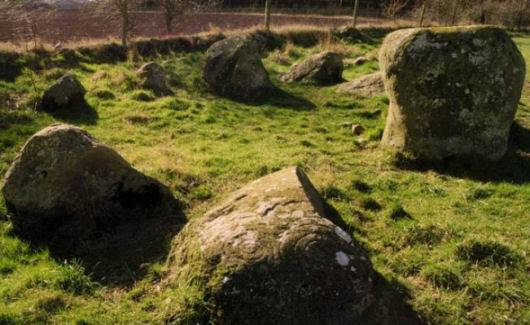 One of the smallest stone circles in England, the appropriately named Little Meg Stone Circle lies less than a kilometre to the north east of its much larger neighbour Long Meg . The circle is situated near the village of Little Salkeld and is sometimes known as the Maughanby Stone Circle.

The irregular circle consists of eleven stones grouped around a central raised area- the tallest stone stands around 3.5 feet high. The circle measures only about 5 metres at its widest point and has been much disturbed over the centuries. One of the stones possesses curious geometrical carvings - consisting of a spiral and five concentric circles, similar to those found on Long Meg. A second, much more elaborately carved stone has been taken to the Tullie House Museum in Carlilse.

Little Meg is a kerb circle, and once surrounded a low barrow in which was found a cist containing a cremation and an urn.

Little Meg Stone Circle is situated off the A686, on a minor road to Glassonby near Little Salkeld, the circle stands on private land and can be viewed from the road that passes the field.


Long Meg and her Daughters