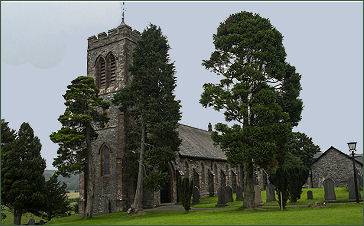 The village has a long history, it is recorded in 1202 as Lofwik, and later as Laufwik, the name derives from the Old Norse words "Lauf-vík" meaning ' Leafy Bay'. Lowick was originally owned by William de Lancaster, 5th baron of Kendal, before becoming the property of Robert de Turribus during the reign of the first Plantagenet king, Henry II. The manor later passed, by marriage, to the Ambrose family, who held it until 1684. It then passed through the hands of several owners until it was acquired by the Blencowe family.

Lowick Hall incorporates the remains of a former pele tower, the tower section of the hall probably dates to the the fifteenth or sixteenth century. 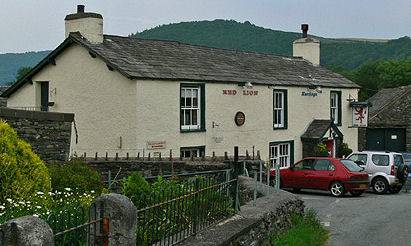 The village church, St. Luke's, stands on its own away from the village, is built of local slate rubble and is a grade II listed building. It dates to 1818, but occupies the site of a former chapel mentioned in documents dated 1577, the church was rebuilt between 1884 and 1885. The amorial bearings of the Blencowe family are depicted in a window.

The village inn, the Red Lion (pictured right), played host to children's author Arthur Ransome of Swallows and Amazons fame. In his autobiography he mentions the inn: ". . .drank our second pint in the Red Lion at Lowick Bridge." The author spent part of his adult life at Lowick Hall. The Red Lion offers accomodation, home-cooked food and cask ales, as does the Farmers Arms, at Lowick Bridge, a characterful inn that dates back to the fourteenth century.

An annual agricultural event is held in the village called the Lowick Show, but known locally as the Lile Royal, which attracts visitors from nearby towns and villages. There are games, stalls, cattle, ferret and dog shows, as well as competitions for bakery, and arts and crafts.

Every May bank holiday one household in the village hosts a 'duck race', whereby plastic ducks are put into the stream in the house's garden and 'raced' against each other. The race is followed by food and drink until late in the evening, even for the ducks.