Bleak and rugged Levers Water reservoir, on the Coniston Fells above Coppermines Valley, lies at a height of 1,500 feet, at the foot of the steeply descending slopes of Great How, High Fell and Raven Tor. 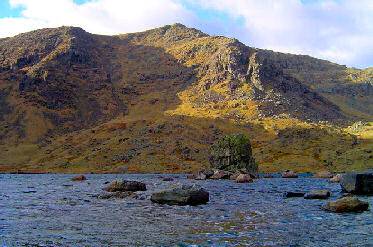 The Coppermines Valley is an area well known to walkers. Mining in the area, on a small scale, began in Roman times, the area became widely used for copper mining from the seventeenth century. The water falls on Church Beck are highly attractive. Some of the old mining cottages by Levers Water Beck have been converted into a youth hostel.

The route to Levers Water from Coniston

*Commencing at the Co-op store in Coniston village, follow the lane betwwen the shop and the hotel, passing through a gate. Church Beck can be heard and occasionally be seen through the trees.

*Follow the track, which turns to the left after passing the youth hostel and rises by the side of a series of waterfalls.

*Above the top of the falls the track zig zags to the right, at the 2nd bend, turn at the path to the right, contunue along this path for a short way until reaching an almost level section, turn left.

*The route then begins to climb steeply via a rocky step to meet a water channel. Turn left and continue upwards. Old mine workings will be seen to the right

*Continue uphill until the dam at Levers Water comes into sight. Return via the same route.