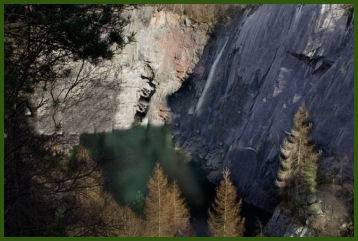 The quarry, once worked as a open pit, is now now flooded by 150ft, with a chamber coming off the bottom. The green slate quarry walls rise straight up from the water 50m to the trees. The water has a maximum depth of approximately 28 metres. Inside the quarry there are a number of tunnels and caverns.

Although permission for diving is not granted by the quarry owners, divers are not prevented from using the site at their own risk. Access to the lower car park and tunnel can be obtained by paying £4.00 per car at the house. Access to the water is not easy and involves wading through a 120 metre flooded tunnel, followed by a descent down a scaffolding ladder. Several cars litter the quarry floor.

The quarry is signposted off the A593 Ambleside to Coniston road.

Warning: A number of divers have lost their lives in Hodge Close Quarry, mainly as the result of getting lost in the underwater tunnels.


Image courtesy of Cumbria Tourist Board